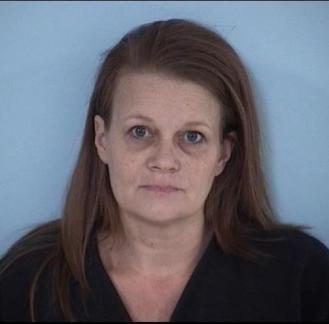 DeFuniak Springs, Fla— A picture is worth 1,000 words. A photo taken of a deputy on the scene of a shots fired call is no less than heartwarming.

Tuesday morning around 2:30am Walton County Sheriff’s Office deputies responded to Wildflower Street in DeFuniak Springs after a 911 call by repossession agent who said a woman was firing shots at him. The victim told deputies he was at the residence to repossess at Pontiac G8 that was on the property. While he was preparing to tow the vehicle the suspect Staci Kolb Jones,44, came to the front door with a handgun. He stated to deputies he told Jones who he was, but Jones pointed the gun toward him and fired one round from the gun. The victim stated he then hid behind the tow truck and repeatedly told Jones to put down the gun. Another shot was fired as the victim called 911.

Deputies gathered evidence at the scene and talked to both parties involved. Jones was subsequently arrested for aggravated assault without intent to kill.

When a WCSO Lieutenant arrived on scene, he noticed Deputy Kallie Wright inside the home holding a small infant. When Jones was detained for questioning there was no one else inside the home to care for the crying child. Deputy Wright stepped in and took care of the infant until another party got on scene.

A picture worth 1,000 words. Deputy cares for infantduring shots fired call on Wildflower St early this am. Info to come! ❤ @weartv @WJHG_TV pic.twitter.com/lYufiR6SGn

“I’m not surprised to hear of Kallie’s actions,” said Sheriff Michael Adkinson. “She is a bright young lady with a bright future here at Walton County Sheriff’s Office.”

Jones was transported and booked into the Walton County Jail.