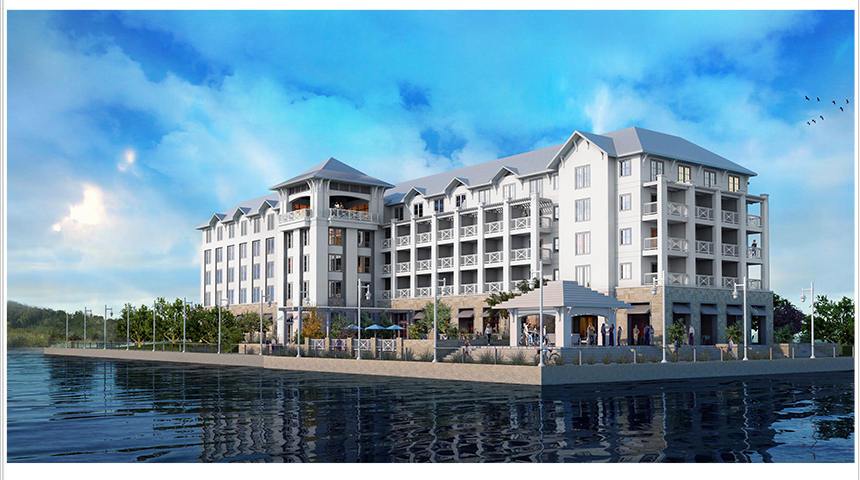 In positive news for the revitalization of Panama City’s downtown waterfront district, The St. Joe Company and the City of Panama City, Florida have agreed on a long-term land lease to bring a new waterfront hotel and standalone restaurant to the St. Andrews Bay. Under the agreement, St. Joe will lease a City-owned parcel on a portion of the Panama City Marina parcel to develop, construct and operate the businesses.

The agreement follows nearly two years of planning, discussions and public forums between St. Joe, the City and local residents. Under the terms of the lease, St. Joe will pay rent to the City based on the performance of the planned hotel and restaurant. St. Joe intends to fund the hotel and restaurant project without any City or public funding.

“We believe that a vibrant downtown with a mix of residents, shoppers, businesses and visitors benefits the community as a whole,” said Jorge Gonzalez, President and CEO for St. Joe in a press release about the lease agreement. “We are making this investment in downtown Panama City with the anticipation that it can be a catalyst for other investments that over time, will make downtown Panama City a vibrant destination to live, work and visit.”

This project will be the first step towards the initiation of the award-winning Strategic Vision for Historic Downtown created by Dover Kohl & Partners. Adopted in 2019, the vision was created from community led efforts including workshops, focus groups, town hall meetings, and design charrettes. View the complete documents here www.rebuildpc.org.

Plans for the projects feature a five-story, branded hotel on the western portion of the marina property with an adjacent restaurant with outdoor seating. Guest will have sweeping views of the St. Andrews Bay and a public promenade is also planned along the property’s edge offering a picturesque place to stroll and enjoy the surroundings. An event lawn and surface parking are also included in the plans.

“It has been very exciting to see private investment coming to downtown Panama City following Hurricane Michael,” said Greg Brudnicki, Mayor of Panama City said in a press release. “The marina is a tremendous asset to the people of this community, and we believe that this hotel and restaurant project will be a great complement to the plans that we have for the rebuilding of the marina.”

Upon completion, the hotel and restaurant will be managed by St. Joe Resort Operations, LLC (“St. Joe Hospitality), a subsidiary of St. Joe that operates hotels, restaurants and other hospitality assets in Northwest Florida. The company has three existing hotels under management with an additional four hotels currently under development or construction and anticipates a fifth will break ground in the coming weeks. St. Joe intends to announce the brand of the planned hotel at a later date. The company intends to break ground in the second quarter of 2021.