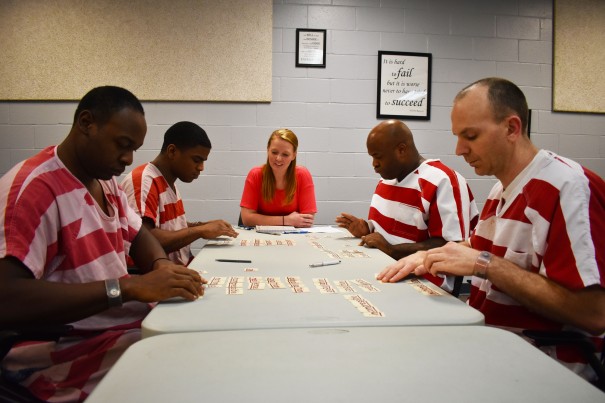 DeFuniak Springs, Fla— Walton County Jail inmates will now have a chance at learning to read and write.

“We find that a lot of the population in our jail is either way below reading level or functionally illiterate,” said Sheriff Michael Adkinson.

That’s why Walton County Sheriff’s Office is in the beginning stages of implementing “Sound Training Reform”. Created in Middlesbrough, England the reading program is proven to increase reading ages of participants by an average of 27 months in just six weeks. The Walton County Jail is the first incarceration facility in the United States to pilot the program.

Sound training consists of six, one hour sessions delivered over a six week period. A tutor, trained by the program’s founder and creator Katy Parkinson, leads a group of four inmates through a variety of activities designed to close the literacy gap.

“What we’ve done is try to determine the needs of the inmates and how to make them successful,” said Adkinson. “For anyone to be successful in life it’s critical they have the ability to read and write.”

“Reading is hopefully part of the jigsaw puzzle that will allow them to reintegrate into the community,” said Parkinson. “And, hopefully, give something back,”

“This is another step in trying to break the cycle of incarceration,” said Adkinson.

The first four inmates have been selected to be a part of the program’s pilot at the Walton County Jail and have already begun participating in the training phase.