Freeport, Fla—A Freeport resident was transported to a burn center after suffering 1st and 2nd degree burns following an explosion on his boat Wednesday night.

Just before 8:30 PM, a 911 call promptly dispatched Walton County Fire Rescue crews to the Freeport Marina and Yacht Club in reference to a boat explosion. When firefighters and paramedics arrived on scene, they immediately began treating the boat owner’s burn wounds.

The patient stated that he was siphoning gas out of a generator that was still hot on his boat, which was tied up to the channel marker in the middle of the bayou, when he spilt some of the gas down the front of his legs and onto the hot generator, causing the explosion. He tried to retrieve a fire extinguisher but quickly realized the fire was too much for him to handle. The man managed to escape through the scuttle hatch on his boat and was transported back to land by a nearby kayaker. 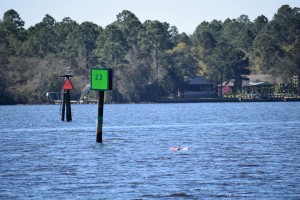 The patient was transported to a burn center by Okaloosa Med Flight where he is receiving medical treatment for his burn wounds. A flag was placed over the sunken boat to warn boaters of the wreckage.