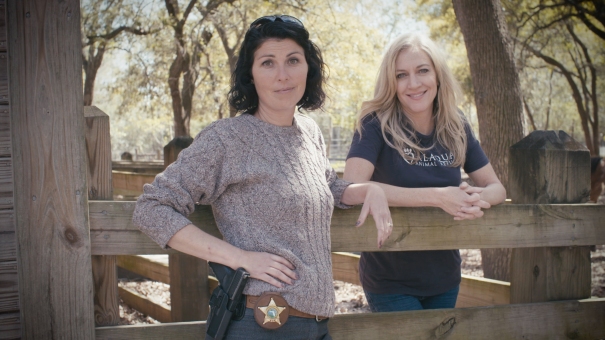 The new series, Animal PD, will premiere on Saturday night, April 14, 2018 at 9 p.m. (CST) on the Nat Geo WILD TV Channel, and will be shown right after the popular The Incredible Dr. Pol. Additional shows are set for Saturday, April 21 and Saturday, April 28.

Animal PD is based on the unique partnership of Alaqua Animal Refuge and the Walton County Sheriff’s Office, and their relentless efforts to bring about awareness and change in overall animal welfare and animal cruelty cases. The series follows Laurie Hood, founder of Alaqua, and Breezy Adkinson, a WCSO investigator, as they investigate anonymous tips, execute raids and rescues, and build cases to bring their owners to justice.

An “Animal PD Premiere Party” has also been scheduled for April 14 at 7:30 p.m. at The Hub 30A, and the community is invited to join us! There will also be live music at The Hub from 7 to 9 pm. The premiere episode, “Unchained and Dangerous,” will be shown on the big screen and highlights Adkinson and Hood as they respond to a suspicious call of two aggressive dogs terrorizing a neighborhood, while the Alaqua team rescues and rehabilitates dogs and cats in critical condition, abandoned at a deceased man’s trailer home.