For Immediate Release—The EOD Warrior Foundation is honored to present a very special donation from President George H.W. Bush for its upcoming auction night held each year at the Emerald Coast, and open to the public. This year, the auction is May 4.

The Foundation runs national programming and support for Explosive Ordnance Disposal warriors and their families stationed around the world, from its non-profit headquarters in Okaloosa County.

EOD stands for Explosive Ordnance Disposal, the disarming and disposal of bombs. EOD technicians are highly-trained military members serving in the Army, Marines, Navy and Air Force, who are responsible for disarming, rendering safe and then disposing of bombs. The EOD profession is one of the most dangerous occupations in the military.

The auction item from President Bush is a limited edition print—one of just 35—by artist Robert D. Fiacco.

Anyone can submit a sealed bid if they cannot attend the auction.

The painting is called “Anchors to Windward.”

It is signed by President George H.W. Bush, and the artist.

The backdrop for the artwork was inspired in 2012—when the Naval carrier and its crew paid visit to the former President’s home for his 88th birthday celebration.

Former President George H.W. Bush has the original painting in his personal office at Walker’s Point. The artwork image measures 36” x 24”—and limited edition print for the auction was recently professional framed, as shown.

This auction item includes a commemorative program from the 2006 christening, in Virginia, of the George H.W. Bush (CVN 77) Naval aircraft carrier. This event program “magazine” is signed by the former President as well.

The Bush family’s heartfelt affinity for the EOD community dates to the first EOD Naval Commander, Admiral Draper Kauffman, who was a Bush family relative.

Eglin is base host to the Admiral Draper Kauffman Training Complex, for EOD service members who are serving in all four branches of the military.

“Each member of EOD plays a unique role in both peace time and wartime, and we Bushes wish you Godspeed as you conduct your quiet, critical missions—so many of which are never publicized or known.”

The President also remarked about specially trained EOD members who serve in other equally humble capacities:

“The United States Secret Service is augmented by EOD personnel in protection of Presidents and Vice Presidents and their families, and we … will always be grateful.”

Another item in the EOD Warrior Foundation’s auction reception is a stack of books donated from different Bush family members. Each one is signed by its respective author: Barbara Bush, Doro Bush, and Jeb Bush, through the Barbara Bush Foundation for Family Literacy.

The annual auction of the EOD Warrior Foundation is a reception-style walkabout event with both live and silent auction components, food trucks, beverage sales, and tables of merchandise.

There are more than 100 live auction items, and a professional auctioneer will conduct bidding. The silent auction runs concurrently.

Anyone who would like to make a sealed bid for the framed artwork donated by President Bush should contact the Foundation at 850.729.2336.

The minimum sealed bid on the framed “Anchors to Windward,” with the signed USS George H.W. Bush christening event program, is $3,000.

One hundred percent of all auction proceeds will be utilized to support the EOD Warrior Foundation’s programmatic efforts focusing on their four pillars of support, financial relief, education, hope and wellness, and EOD Memorial Care.

All are welcome to help support the EOD Warrior Foundation.

The event on May 4 starts at 5 P.M. at the Emerald Coast Convention Center, 1250 Miracle Strip Parkway SE, Ft. Walton Beach.

(More information on the next page.)

About THE FORMER PRESIDENT’S MILITARY SERVICE:

George H.W. Bush was a young naval aviator flying a mission in the Pacific theater of World War II when forced to bail out of his burning pilot’s cockpit and parachute into angry, enemy waters.  He was nearly captured. He was recused after several hours adrift on the water, but has agonized over the loss of his radioman and gunner on board. Bush went on to become a member of Congress, Director of the C.I.A., United Nations Ambassador, and Vice President before being elected the 41st President of the United States.

While it was being construction in shipyard, it covered 550 acres during its 7-year build-out—and today is home to about 6,000 Navy personnel on board. It carries and maintains 90 fixed wing and helicopters.

Robert Fiacco is a nationally renowned military aviation artist. Raised in California, Fiacco graduated from the University of California, Irvine. He joined the U.S. Navy, and was designated a Naval Flight Officer in 1987. For two decades, he completed numerous squadron deployments. He continued to pursue fine art completing portraits, aviation illustrations, and landscape paintings—and in 1996, he left active duty and attended the Pennsylvania Academy of Fine Arts. He completed a demanding, classical curricula, in life painting, drawing, perspective, anatomy, and color theory. He later rejoined the Navy in 1998 but also had success with several group and solo exhibitions. He has exhibited at the National Museum of Naval Aviation—where several of his paintings are part of the museum’s permanent collection. He is also an accomplished contemporary fine artist. His awards include the R.G. Smith Award for Excellent in Naval Aviation Art (2012), Honorable Mention in the National Museum of Naval Aviation Art Exhibit (2012), and First Prize in Military Aviation for the American Society of Aviation Artists International Exhibit (2014).

About THE EOD WARRIOR FOUNDATION:

A COPY OF THE OFFICIAL REGISTRATION AND FINANCIAL INFORMATION MAY BE OBTAINED FROM THE DIVISION OF CONSUMER SERVICES BY CALLING 1-800-HELP-FLA (435-7352). TOLL-FREE WITHIN THE STATE. REGISTRATION DOES NOT IMPLY ENDORSEMENT, APPROVAL, OR RECOMMENDATION BY THE STATE.  THE FDACS WEBSITE IS www.800helpfla.com 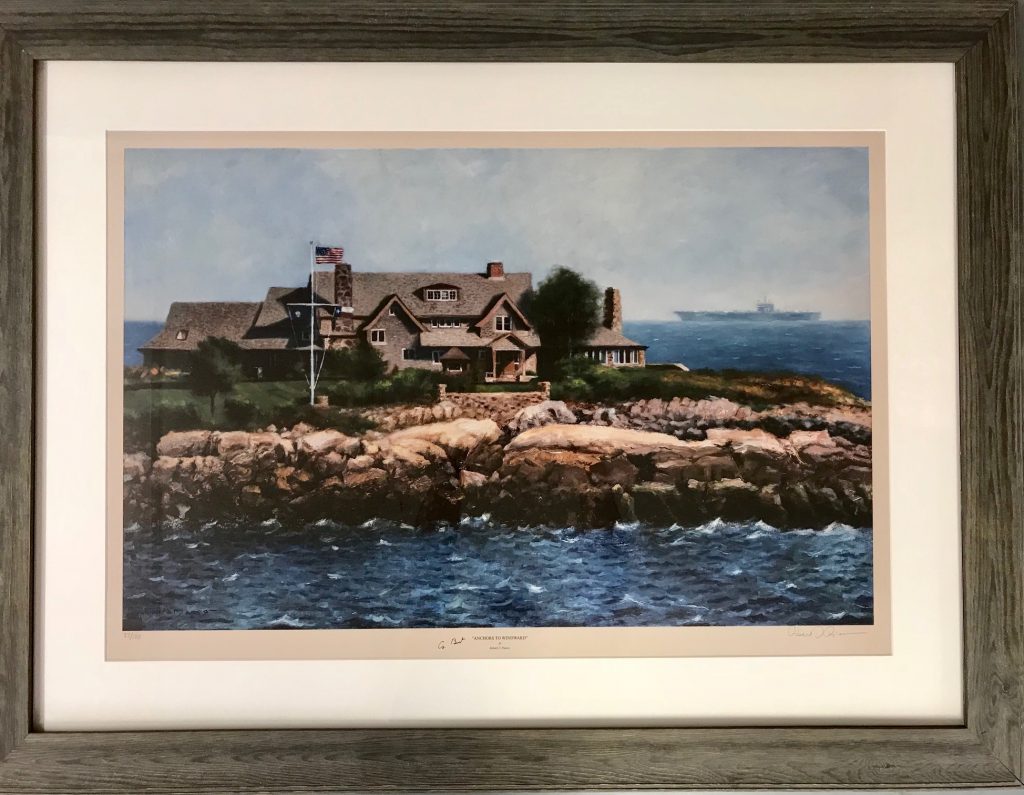 Be the first to comment on "GEORGE H.W. BUSH MAKES RARE DONATION"