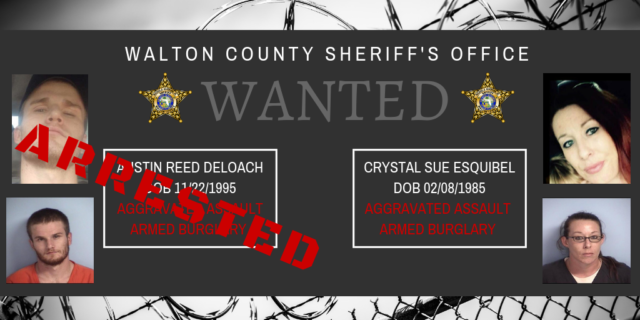 FREEPORT, Fla— An arrest has been made in connection with an armed burglary in Freeport on Thursday.

Austin Reed Deloach, 22, was arrested by the Escambia County Sheriff’s Office and was booked into the Escambia County Jail for an out of county warrant early Saturday morning. He will be transported to the Walton County Jail where he will be charged with aggravated assault and armed burglary following an investigation into the incident on October 18th where he and Crystal Sue Esquibel, 33, broke into a Freeport woman’s residence and upon leaving, fired one shot from a revolver toward the home, striking the victim’s vehicle.

The Walton County Sheriff’s Office is still seeking information on the whereabouts of Esquibel who is described as a white female standing approximately 5’1, and weighing around 130 lbs. She is possibly driving a light-colored, four-door, older model sedan with a missing rear bumper.

Anyone with information is asked to call the Walton County Sheriff’s Office at (850) 892-8111, or you can remain anonymous by calling Emerald Coast Crime Stoppers at (850) 863-TIPS. Submit a web tip at http://www.emeraldcoastcrimestoppers.com/ or send a mobile tip using the P3 Tips Mobile Application or the Walton County Sheriff’s Office smartphone app. You could be eligible for a cash reward.

Be the first to comment on "ONE SUSPECT ARRESTED; ONE STILL WANTED IN CONNECTION WITH ARMED BURGLARY & AGGRAVATED ASSAULT IN FREEPORT"