Just south of the Clyde B. Wells Bridge, tucked away in the pines and live oaks on the west side of 331, sits a quaint church. The South Walton First Baptist Church at the Bay. It’s small, but mighty. What it may lack in size, the congregation makes up in heart. 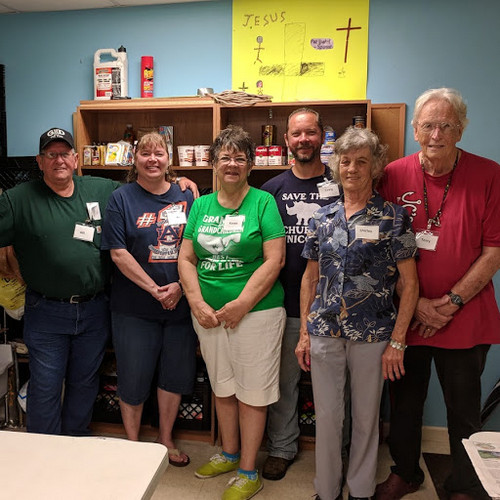 On Saturdays, volunteers from First Baptist and other churches, alongside volunteers affiliated with no church, join together in the early morning hours to prepare to distribute food to locals near and far, feeding around 200 people each week. 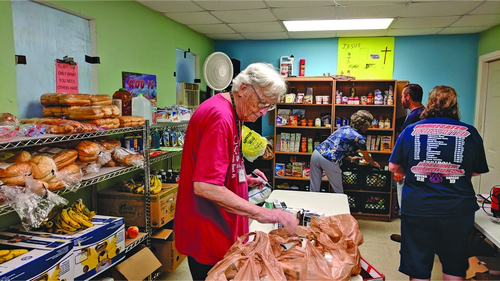 First Baptist receives donations as well as weekly deliveries from Destin Harvest, a nonprofit organization that transports food donated from local restaurants and grocers to food distribution ministries in Okaloosa and Walton counties. These items include fresh meat, dairy products, fresh fruit and vegetables, and also non-perishable canned goods. Volunteers at First Baptist take in food on Wednesdays and Fridays, mark out the UPC codes, sort, separate and stock the freezers and shelves.

Distribution is from 9:00 am to 4:30 pm on Saturdays. They hold a prayer before distribution, and they make themselves available during distribution if anyone wants to pray or speak about the church, but they don’t ask anyone to listen to a sermon. “We’re not doing it for the church to get bigger,” stated Pastor Campbell. “We’re doing it to meet a need that is very real in South Walton and Freeport.”

There is a misconception in the affluent South Walton area that people aren’t in need. “I have been in homes that sell for $200,000-$300,000 and people are sleeping on mattresses on the floor,” said Pastor Campbell. “Just because they’re in a nice house doesn’t mean they have a whole lot of money.”

Distribution at the South Walton First Baptist Church at the Bay is a judge free zone. They don’t ask questions. They don’t require people to give personal information to receive food. The anonymity has brought people from all over as far away as Mossy Head and north of DeFuniak Springs. “When Jesus fed the 5,000 He didn’t ask for names, He didn’t ask for addresses, He didn’t ask for qualifications. He just gave them the food. That is the mindset that is behind this,” stated Pastor Campbell. “We are doing it the way The Lord has led our people to do it.”

Meat from the freezer is distributed based on the amount of people being fed. The recipients pick out the rest. The Pastor explained they limit food waste by having people pick out what they will eat instead of giving them a box of food they might not like. “It also gives a sense of dignity,” said Pastor Campbell. “We don’t fix prepared boxes. They’re not going in there being told what to take.”

This is truly a ministry for the people by the people working through God, and couldn’t happen without the help of their volunteers and donations. “We’ll keep on going as long as The Lord keeps providing food,” stated Pastor Campbell.

If you are interested in donating, volunteering or want more information on the food panty at the South Walton First Baptist Church at the Bay, you can check out their Facebook Page – The Church at the Bay, call 850-685-0684 or email the_celt@panhandle.rr.com.

The post A MInistry of Love – Church at the Bay Food Pantry appeared first on South Walton Life | 30A News, Events and Community Information.