Sit, stay, shake: that’s what most people look for when searching for a dog trainer. That might be advantageous when you get a new puppy, but most dogs six months and older have already developed behavioral issues. Puppies need rules, boundaries and limitations even as young as two months old.

Pumi puppy Roxy, at Christmas, from Santa (aka my husband.) Now, Roxy was in the dog house for about five days, as I had told my husband several months before that we didn’t need any more dogs, because we already had four! And, I definitely didn’t want a puppy! Who wants to get up in the middle of the night for potty breaks, feed it three times a day, and clean up potty accidents? Heck, our four rescue dogs were chill, a great low energy pack who all wanted to sleep in late.

The reason he searched out this rare breed was because we had discovered it while in California the previous year when I was doing some shadowing with a seasoned trainer/behaviorist. (She had worked with Cesar the Dog Whisperer even before he had a show) But just because I said I would like to have one of those, I didn’t mean in addition to our pack of four dogs! 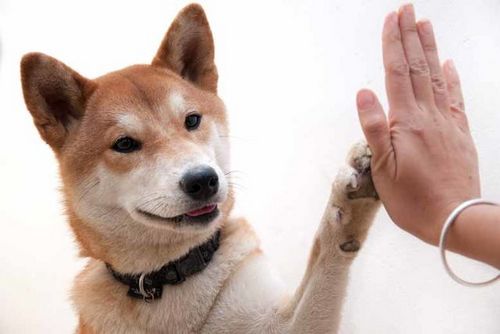 Now in hindsight, it gives me more knowledge to train my client’s dogs who come to me with issues/behavioral problems. When Roxy began playfully biting, like most puppies do, I stopped her by tapping her on the nose and saying “no bite.” I have seen this same behavior with other dogs whose owners complain that they are mouthy. I know this is because this biting as a puppy was seen as cute and playful. Trust me, it’s not.

What I’m saying is there’s a lot more behind the scenes of working with an out-of-control dog. In my opinion, it’s not only about the training, it’s about the psychology of why a dog is acting a certain way, and how to fix it.

In 2014, I started 30adogtrainer.com, a canine-aqua-therapy business to help rehabilitate dogs who were overweight, had arthritis and other diseases. But after training with other dog behaviorists throughout the country, I renamed it emeraldcoastdogbehavior.com, because it’s really all about the behavior issues.

When a dog is unruly, there is an underlying reason. The same goes for dogs that are leash aggressive, lunge at other dogs and people because they want to play, dogs that nip, dogs that spin and chase their tail, dogs that pull on the leash, you get the picture!

I peel the layers off, like an onion, to determine why the dog is acting that way, and figure out exercises to change their behavior. It’s always challenging to find what works best to transform your dog.

Be the first to comment on "Sit. Stay. Shake: Dog Psychology"