WALTON COUNTY, Fla— On March 22, 2019, a thief was caught on surveillance video stealing approximately $17,000 worth of jewelry from McCaskill & Company in Miramar Beach.

Shortly after 10:00 AM on Friday, the suspect, who later identified himself as “John Abbott,” entered the local jewelry store and told employees he was looking for an engagement ring for his fiancé, “Sarah,” within his $20,000 budget. The employees showed him several pieces of jewelry before he selected a Henri Daussi engagement ring and wedding band set. Before purchasing the rings, he asked to see them outside under natural lighting. Once outside, the suspect confirmed that he would like to purchase the engagement ring and wedding band. As the employee began punching in the door code to re-enter the store, she heard the suspect say, “I need to get my wallet,” and noticed him walking towards his vehicle. The employee tried to stop him, but he continued to his vehicle and left heading westbound on Highway 98 towards Okaloosa County.

The suspect is described as a middle-aged white male with brown hair and a full beard standing approximately 5’7″ tall wearing blue Under Armour ball cap, a black Columbia jacket, glasses, and blue jeans. Video surveillance shows him leaving the parking lot of the jewelry store in a gray Toyota Yaris with no license plate and multiple bumper stickers covering the trunk and back bumper of the vehicle. 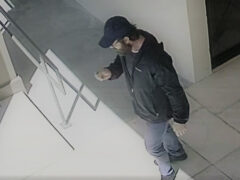 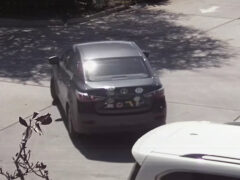 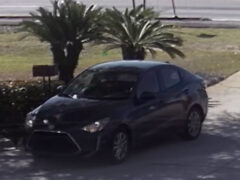 Anyone with information is asked to call the Walton County Sheriff’s Office at (850) 892-8111 or you can remain anonymous by calling Emerald Coast Crime Stoppers at (850) 863-TIPS. Submit a web tip at http://www.emeraldcoastcrimestoppers.com/ or send a mobile tip using the P3 Tips Mobile Application.