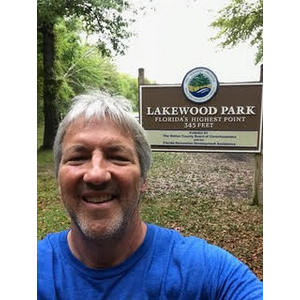 Britton Hill is 54 miles away. Positioned near the unincorporated community of Lakewood, it measures 345 feet above sea level and is the highest crest in Florida.

More a gently rising undulation than an actual mound or knoll, Britton Hill’s summit is denoted by a plaque, monument, restroom, and a couple of picnic tables.

Florida’s “mountain” abides on the road less travelled, a bit out of the way, existing in obscurity, yet proudly having its place, its moment.  Many of you can relate to Britton Hill. Even though it seems like one dwells in the background of life, don’t you have a certain place and moment? Further, if you weren’t around wouldn’t you be missed?

The Christmas classic It’s a Wonderful Life tracks the story of George Bailey, a man who has sacrificed his dreams to help others. George is a banker, but he’s also a husband, father, brother, friend, and helper to many of the residents in his enclave of Bedford Falls. When life throws George a curve, he becomes disillusioned and he begs the question of life and what really matters.

Pining an alternate reality, he learns what life for him and others would look like had he never existed. Guardian angel Clarence provides George that glimpse and helps him learn through a series of encounters the difference he’s made.

Earl was a neighbor. He lived a full and long life well into his late 90’s, and was a World War II vet. He was married to Mattie for about 70 years, and they raised a family.

Through time, Earl shared his wisdom about serving his country, about quiet success, about love, and about God.

In his later days, as Earl grew increasingly frail he continued to impact others, even in convalescence. From his hospital bed the long-time Gideon was a faith witness to a variety of doctors, nurses, and attendants. When he returned home he was excited to report a tally of how many of those workers had come to know Jesus.

Earl mattered to a lot of people. Yet, if you didn’t reside in this unpretentious suburban St. Louis neighborhood, you likely didn’t know him. Well into one’s 50’s he still referred to them as “young men.” He was the last person to call someone that.

And back then, the college search process was not the elaborate and competitive undertaking for high school seniors it is today. In the past, each senior was allotted a brief appointment with the school counselor, Ms. Austin, to share and discuss post-graduation plans. Conversations usually  lasted all of 30 or 40 seconds:

Kirk:  “I’m thinking about going to North Texas State.”      Ms. Austin:  “Everyone I know who’s gone to school there has been successful.”

That short exchange’s impact was tremendous. During four years in Denton, Texas, Kirk met his future wife, secured friends for a lifetime, and gained an educational foundation that fostered success in several areas. Ms. Austin made a difference.

The ones who affect others most often seem to be “every man” and “every woman.” Their Google search hits yield an entry or two, if that. Yet they are heroes and heroines, making a difference, and undoubtedly also for others. Who are your George Bailey’s, Earl’s, and Ms. Austin’s? Just like Britton Hill, the unremarkable is quite remarkable.

The post High Points in Low Places and the Impact of Obscurity appeared first on South Walton Life | 30A News, Events and Community Information.