While driving around Walton County, ever seen a vehicle, similar to the Sheriff’s Cruisers, marked “Sheriff’s Posse” and wondered, “what is that?” 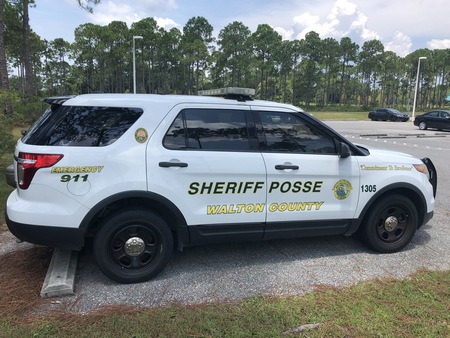 The history of the sheriff’s “posse” dates back to the Dark Ages in England, when citizens were called upon by the sheriff to assist in capturing outlaws. The organization of a sheriff’s posse made its way to America during early colonization in 1635.

The Walton County Sheriff’s Posse has roots dating back to the mid-1800’s, when Florida was still a wild frontier. Besides a few established towns like Pensacola, Milton, and DeFuniak Springs, Florida was still full of thick pine forests, swamps and sandy back roads. There was a lot of ground to cover, but very few law enforcement officials in the territory. The sheriff, in addition to his deputies, needed men to volunteer to help them track down outlaws making their way across the panhandle. These men were deputized and operated under the law, assisting law enforcement in capturing numerous murderers and thieves.

They continued to operate throughout the early to mid-20th century, and assisted in tracking down escaped felons, moonshiners and bootleggers. They found bootleggers before and after prohibition, as Walton County opted to stay a “dry” county for several years after the national repeal of prohibition in 1933.

Years went on, and the frontier turned into well-populated and established towns with more sheriff’s departments being incorporated and adequately staffed. Eventually, the Walton County Sheriff’s Office was able to hire a full team of deputies, and the need for a posse declined.

In 2010, Sheriff Michael Adkinson requested a group of volunteers to once again form the Walton County Sheriff’s Posse to serve as a bridge between the sheriff and the public. Unlike their predecessors, today’s posse does not carry firearms. They do have their own fleet of patrol cars, use the same dispatch, computers, and radio frequency as the sheriff’s office. Uniforms are provided by the sheriff’s office with a patch indicating they are a member of the sheriff’s posse. The posse members receive professional training from the sheriff’s office, and then once qualified, they receive a badge.

The Walton County Sheriff’s Posse does not have the power to arrest anyone, but they do actively patrol the area, assist in neighborhood crime prevention, issue civil citations, help with emergency evacuations, provide traffic control and blocking for funeral processions, and perform elderly welfare checks. They also perform many other services that benefit the community, and assist deputies to improve productivity and multiply the force of the sheriff’s office.

They’ve even been honored by the Federal Government, receiving the Presidential Volunteer Service Award and the Congressional Special Service Recognition. Last year, the unit volunteered 8,418 hours to the sheriff’s office, and according to the state of Florida dollar per hour formula for professional volunteering, it equated to $23.33 per hour. The unit donated $204,833 worth of time to the citizens of Walton County.

The Walton County Sheriff’s Posse currently has 18 members, and is looking to expand. This is a volunteer position and is available to anyone, men and women, from the ages of 19 to retirement. Those interested must submit to a criminal history check and pass a criminal history investigation. A minimum of 16 hours is required per month. If interested in joining or want more information on the sheriff’s posse, please contact the Walton County Sheriff’s Office at (850) 892-8111.