Opening a donut shop was Nicole McKee’s dream for as long as she can remember. She can’t tell you why it’s been all about donuts, but the people of Walton County are glad her dream became a reality. 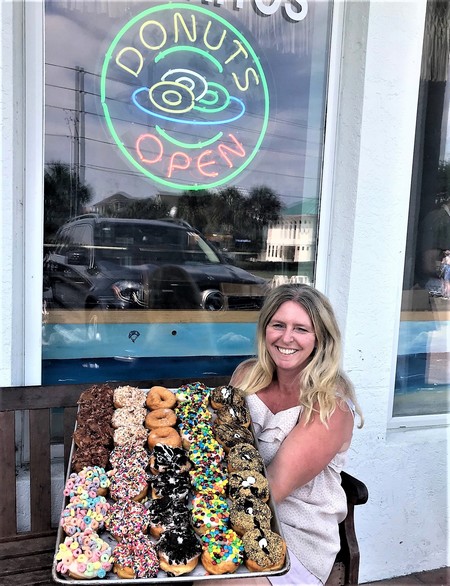 Nicole started getting serious about donuts around the age of 19. That’s when she decided to meet with the owner of Gibson’s Donuts in Memphis, TN. The owner showed her around and explained the ins and outs of running a donut shop and let Nicole know just how demanding and time consuming the business was. Nicole was not discouraged. She came home that day and with great excitement as she told her husband and her family of her plans to open a shop. She described what the shop would look like and how she wanted to have a donut truck, similar to an ice cream truck that would tour the area playing music and selling donuts. They all smirked and told her she was off her rocker!

At that time Nicole was working at a restaurant in Collierville, TN called the Silver Caboose, and husband Kevin had just entered the real estate business as an agent. The years went by and life got busy, but Nicole never forgot her dream. In 1999, Nicole and Kevin took a trip to Seagrove Beach and fell in love with the area. Kevin immediately wanted to sell their townhome in Tennessee and move to Seagrove Beach. At that time Seagrove was a sleepy beach town on 30A that had not yet been discovered. After much discussion, Kevin convinced Nicole to take a risk and they moved to the area. In 2000 they bought a condo near the beach and became locals of Walton County.

Nicole worked in a restaurant in Grayton Beach and Kevin worked at a bike shop in Seaside. There were only three bike shops at that time, and Kevin wanted to open his own. His would be different because he would deliver bikes, something none of the others were doing. In 2001, BigFish Bike Rentals was born and continues to be one of the largest bike rental companies in the area. Kevin and Nicole were finally able to purchase a building on 30A in 2013, which has been the home of BigFish Bikes ever since.

Next door to BigFish Bike Rentals was a commercial space that Nicole thought would be a great place to open a donut shop. Businesses came and went and each time the space became available, Nicole would try to persuade Kevin to open a donut shop but, the answer was always no. Finally, when the last business left the space open, Nicole tried one more time. How convenient it would be to have a donut shop right next to the bike shop. Kevin caved in.  He planned and designed what is now the Donut Hut.  The Donut Hut makes homemade donuts fresh, every day. They also have a wonderful breakfast menu. They don’t have the donut truck with music yet, but they do deliver fresh donuts throughout the 30A area. Nicole’s favorite donuts? She loves key lime pie, banana pudding and maple bacon.

But the story does not end there! As you can see, Nicole is a real go-getter. She and Kevin added Brozinni’s Pizza Seagrove Beach  in 2015. Brozinni’s serves New York style pizza along with appetizers, burgers, salads, pasta and calzones. Hands down, they serve one of the best pizzas around. And, they still serve the famous smoked tuna dip! As if three businesses weren’t enough, Nicole admits that she would like to see a few more Donut Huts throughout the country and would love to be a part of making that happen. And, in the back of her mind she sees a fast food restaurant serving a health-minded menu. As you can see, Nicole has a knack for making her dreams come true!

Be the first to comment on "Faces of Walton: Spotlight on Nicole McKee "