By Mark and Tracy Steeley

I first met Rusty in 1993 at Fort Polk, Louisiana, in August. In Fort Polk the air does not move. And there are nasty bugs, and poison ivy, and snakes. And roving bands of longhorn cattle that could be trapped in our open excavation units. It was the perfect place to learn how to be a migrant field archaeologist, or “shovel bum” as we are known in the industry. Rusty and I learned how to dig holes in the woods together. I hadn’t seen him 23 years.

He looked pretty much the same as he did in the ‘90s, youthful and fit. But that full gray beard was a surprise. A huge pole barn holds his collection of John Deere tractors, one of which, a 1983 model, had belonged to his grandfather, James Lee, founder of James Lee Motors in Crestview. Rusty is a true local, fourth-generation Okaloosa and Walton counties on both sides of his family. “The guy at the tractor place says ‘Wait a minute, you’re an Anchors AND a Lee?’ He felt sorry for me. He felt like that was a little much. My grandaddy’s brother’s kids are running the car dealership businesses now. My side of the family is out of it. We were the Freshwater Lees. The Saltwater Lees were down here. As salty as I might look, I’m actually a freshwater guy.”

Just then Rusty’s cell phone rang. His face dropped. He answered it. 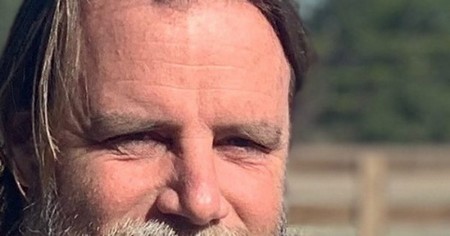 “Mr. Drennan!” he says enthusiastically. I stepped away to give him privacy. When I returned I caught the tail end of his conversation: “Whatever works, I’m all for it. Whatever you need me to do. Yeah. I get it. Yeah, as you know, I don’t want to go. But I will totally go. Alright. Bye bye.”

“Well…yeah,” I say. “That’s probably a good idea. But first why don’t you explain what you do for a living. You know, for the readers.”

“Ok, my company is Anchors Environmental, an independent subcontractor to Fluor Enterprises, a giant engineering firm with headquarters in South Carolina. Fluor is one of the largest companies doing work for FEMA. They do everything. Government contracts all over the world. Fluor is bigger than FEMA. The company I work for is bigger than the agency I work for.”

“Does this have to do with Hurricane Maria?”

“Yes. When FEMA pays to put a new school or road system into a city that was damaged by natural disasters, I make sure they comply with all the environmental and historic preservation requirements. I go out there, problem solve, get project grants through the system.

“The guy in charge of FEMA’s public assistance program is down there in Puerto Rico neck deep in a s – – – show. So he calls his contractors for assistance. The top guy in that company just called me and said we need you in Puerto Rico. I don’t say no to that guy. This is the Fluor guy.”

“Why are you reluctant to tell your wife?”

“In 2006 Robin and I go down to my mom’s beach house at Cape San Blas for our honeymoon. And I told her, I am staying home. We wake up the next morning, and there’s an earthquake in Hawaii. The Kiholo Bay earthquake. Three days later I was on a plane to Hawaii. I was gone for six months.”

After more than two decades of constant travel, Rusty is ready to stay home on his ranch while others do the fieldwork for him. He’s currently hiring environmental specialists to be on call for the next natural disaster.

Be the first to comment on "Faces of Walton; Rusty Anchors"