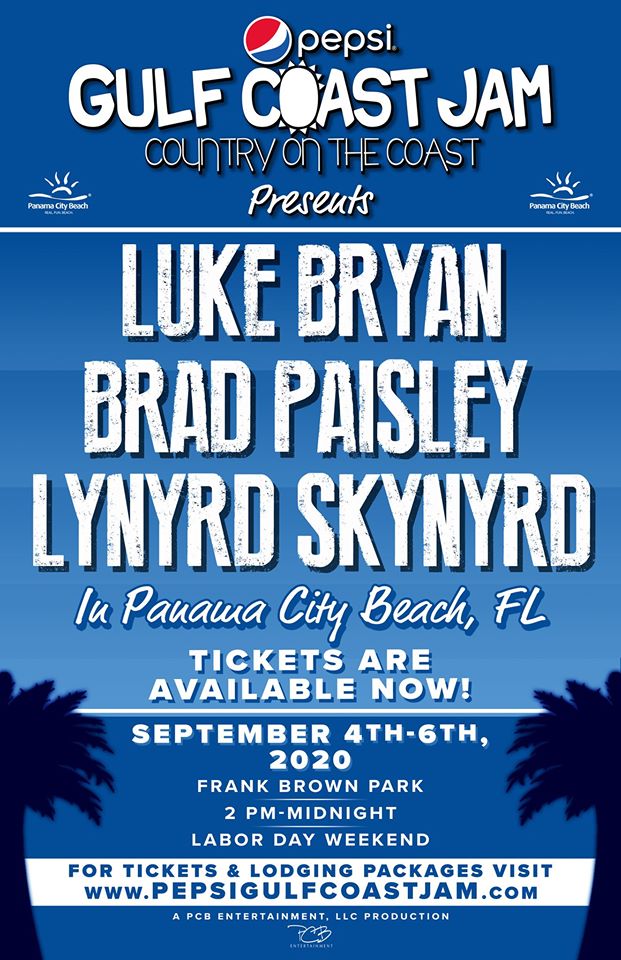 (Nashville, Tennessee…) – May 5, 2020 – Organizers of the Pepsi Gulf Coast Jam spread some good cheer this morning, when they announced the headliners of the 8th annual Country On The Coast festival in beautiful Panama City Beach September 4-6, 2020. Executive Producer Rendy Lovelady and COO Mark Sheldon revealed headliners Luke Bryan, Brad Paisley and Lynyrd Skynyrd on the Pepsi Gulf Coast Jam Facebook page. Tickets for the three-day event will be available at www.GulfCoastJam.com beginning today, May 5, 2020.

“All plans are moving forward for what we feel will be our biggest festival ever,” said Executive Producer Rendy Lovelady. “Our Jammers are some of the most dedicated music lovers on the planet, and we can’t wait to get them all down here for some fun in the sun!”

“We’ve said we want to play every venue and market we’ve ever visited around the world and even some we haven’t, so we get to see all of Skynyrd Nation,” said Lynyrd Skynyrd lead singer Johnny Van Zant. “We didn’t get to play Pepsi Gulf Coast Jam in 2016 because of a hurricane so we are excited to return to the festival with our farewell tour!”

Last year’s Pepsi Gulf Coast Jam, which Billboard Magazine named one of “The 10 Best Country Music Festivals,” drew over 20,000 fans per day from all 50 states and 14 foreign countries to Panama City Beach’s Frank Brown Park. The full lineup for 2020 will be announced May 14, 2020.

“Our hotels, condos, restaurants and other city attractions are excited to welcome our fans back this September,” said Pepsi Gulf Coast Jam COO Mark Sheldon. “Tripadvisor ranked Panama City Beach #8 in their list of Top 25 Beaches in the United States, and we couldn’t agree more.”

General Admission tickets will begin at $129, and Military tickets and the recently-announced First Responder passes are only $109 for all three days. VIP Pit tickets are $409, Golden Circle are $699 and Side Stage tickets are currently $1,150. Early entry passes will be available for $75. The popular and very limited three-day General Parking and Platinum Parking passes are $50 and $75, respectively, and will also be available beginning May 5.

The exclusive Skybox Tables accommodate 8-12 patrons and offer unparalleled views of the stage. Guests have access to the Side Stage, Golden Circle and VIP Pit areas, a crossover walkway and air-conditioned VIP restrooms. The Skybox Tables also include six drink coupons per seat, per day, heavy hors d’oeuvres, a dedicated cocktail staff and two VIP parking passes per table.

Shuttles offer transportation to the festival grounds from convenient locations throughout Panama City Beach. The Shuttle Passes are $50 and are complimentary for Preferred Lodging, VIP Pit, Golden Circle, Side Stage and Skybox ticket holders.

Details on all ticket levels, parking passes and shuttles are available HERE.

About Luke Bryan In 2019, Luke was named as the first-ever recipient of the ACM Album of the Decade Award for CRASH MY PARTY and wrapped the last ten years as the Most Heard Artist of the Decade by Country Aircheck. Since his debut in 2009, Luke has released 24 #1 hits and has more RIAA certified digital singles than any other country artist with 54 million. Luke has also tallied up seven Billion streams, 12 million albums sold, plus four Platinum albums, two 4x-Platinum albums, seven RIAA certified albums, 22 Platinum singles and 12 Multi-Platinum singles.

Luke’s headline concert tours have played for over one million fans every year for the last six years with four of those reaching 1.5 million. In total Luke has performed for nearly 12 million fans in the last ten years with seven headline tours including 36 stadium concerts, 11 Farm Tours, six years of Spring Break shows and six sold-out Crash My Playa concert events. He was recognized as a CMT Artist of the Year six consecutive times, was twice named the Entertainer of the Year by BOTH the Academy of Country Music and the Country Music Association and was honored as a NSAI Artist/Songwriter of the Year. In total Luke has won over 40 music awards including six ACM awards, six CMT Music Awards, five Billboard Music Awards, four American Music Awards, two CMA awards, an iHeart and a Teen Choice award and more.

About Brad Paisley Brad Paisley is a critically acclaimed singer, songwriter, guitarist and entertainer whose talents have earned him numerous awards, including three GRAMMYs, two American Music Awards, 15 Academy of Country Music Awards and 14 Country Music Association Awards (including Entertainer of the Year), among many others. He has been a proud member of the Grand Ole Opry since 2001. Paisley has written 21 of his 24 #1 hits and has accumulated over 3.6 billion on-demand streams world-wide. Paisley’s first prime-time special, Brad Paisley Thinks He’s Special, aired on ABC in December 2019 and garnered over 9.2 million viewers. Paisley is involved with a successful ongoing multi-year ad campaign with Nationwide Insurance, along with Peyton Manning. Paisley and his wife, Kimberly Williams-Paisley, are co-founders of a nonprofit organization called The Store, a free-referral based grocery store, which aims to empower low income individuals and families in the Nashville area. Go to www.thestore.org for more information. Paisley has partnered with Boot Barn® and developed an exclusive line of jeans, hats, T-shirts, jewelry, belts and woven shirts called Moonshine Spirit by Brad Paisley. Connect with Brad at www.BradPaisley.com, www.Facebook.com/BradPaisley, on Twitter @BradPaisley, on Instagram @Brad Paisley, and YouTube at YouTube.com/BradPaisley.

About Lynyrd Skynyrd Original members Ronnie Van Zant, Bob Burns, Allen Collins, Gary Rossington, and Larry Junstrom formed the band in 1964, originally known as My Backyard, the band changed to its famous name in the early 1970s, and became popular in the Jacksonville, FL area, where the original members were from. They signed with Sounds of the South Records in 1972 and released their self-titled disc the following year. The album that featured “Free Bird,” arguably the most-recognized single in the Southern Rock genre, has sold more than 2 million units since its release. Later down the road the band recorded iconic tracks “Sweet Home Alabama” and “What’s Your Name.”

The band’s story took a tragic turn in October 1977 when a plane crash took the lives of Van Zant, Steve Gaines, backup singer Cassie Gaines, and several of their road crew. The band took a decade-long hiatus before reuniting for a tour and live album, Southern by the Grace of God. Since then, the band has toured and recorded extensively, with their most recent release being Last Of A Dyin’ Breed. Currently in the third year of their blockbuster Last of the Street Survivors Farewell Tour, the band’s line-up includes original member Rossington, Johnny Van Zant, Rickey Medlocke, Mark “Sparky” Matejka, Michael Cartellone, Keith Christopher, Peter Keys, Dale Krantz Rossington and Carol Chase. The band was inducted into the Rock and Roll Hall of Fame in 2006.

Be the first to comment on "Luke Bryan, Brad Paisley, Lynyrd Skynyrd To Lead Incredible Lineup"