Immense Pacific Ocean seas rolled ashore. The frigid salt water swept into the mouth of the Oregon cave at the foot of Cape Lookout with a roar so loud, the Coast Guard helicopter hovering above was quieted.

For Aviation Survivalist Tristan Heaton, the rescue swimmer looking wide-eyed down towards the cave from the protection of the helicopter’s cabin—it was the kind of day he lived for. Nothing got his adrenaline going in such an incredible rush as when he was preparing to save lives. He was addicted to the natural injection. Looking down at the ocean he thought, “If I make it back from this one, I’m going to go back and do it again.” Heaton said he had waited all his life to “almost die” to help someone. On this day, two brothers were trapped inside the cave. The only way out for the brothers was back through the cave’s mouth, into the wild sea.
* * * 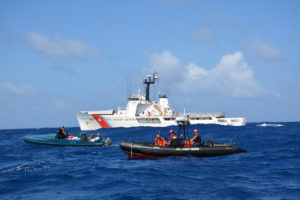 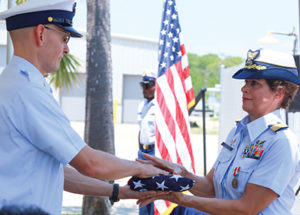 When I learned of this extraordinary cave rescue, I was a lieutenant working in the Pacific Northwest as the Coast Guard’s Public Affairs Officer. I was surprised to learn more about what happened that day and how Tristan “almost died” to save a stranger. I figured if I didn’t know about the extent of what our Coast Guard men and women do to save others, then certainly many people in America and around the world did not either. This story stuck with me as I moved from Seattle to New York and continued to serve as a Coast Guard officer. As I transitioned from active duty to active reserve, I was driven to write a book about the Coast Guard’s modern day heroes and their rescues in an effort to shine a light on our service and celebrate their sacrifices, their risks and their courage. This story was the first chapter I wrote which became So Others May Live: Coast Guard Rescue Swimmers Saving Lives, Defying Death. This book was also a template for the movie “The Guardian” starring Kevin Costner and Ashton Kutcher. 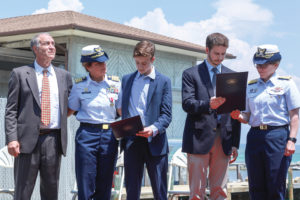 I returned to the Emerald Coast and recently retired on the steps of Station Destin, the place where my career began. Station Destin is special to me, not only because I grew up in Destin when all it was known for was “the luckiest fishing village in the world,” but also because this station for me represents the heart of the Coast Guard. The men and women of our service are selfless and tireless when it comes to their job, their mission and their dedication to save lives, and protect our coasts.

The Coast Guard is a multi-mission force and branch of the military under the Department of Homeland Security. A force of 42,00 men and women nationwide, we are similar to the size of the New York Police Department serving to defend America’s boarders and protect the maritime environment. From drug interdiction, to search and rescue, migrant interdiction, ice operations, law enforcement and marine environmental protection to aids to navigation, the Coast Guard serves at sea and ashore.

The next time you’re going over the Destin bridge or on a boat near Crab Island, honk your horn, wave hello or greet the Coast Guard men and women of Station Destin and thank them for their service. When you need help, the Coast Guard will be there just like Tristan and his aircrew.

Tristan’s fearful thoughts, looking down at the cave he was about to enter, did not get the best of him. He found the confidence in his training and in his aircrew hovering above to descend on the cable and enter the mouth of the cave to rescue a survivor. Only when the helicopter flew into the cave to help Tristan and the nearly unconscious survivor he held in his arms, did this hero escape death and rise up to see the sunrise of a new day.

The post So Others May Live appeared first on South Walton Life | 30A News, Events and Community Information.

Be the first to comment on "So Others May Live"