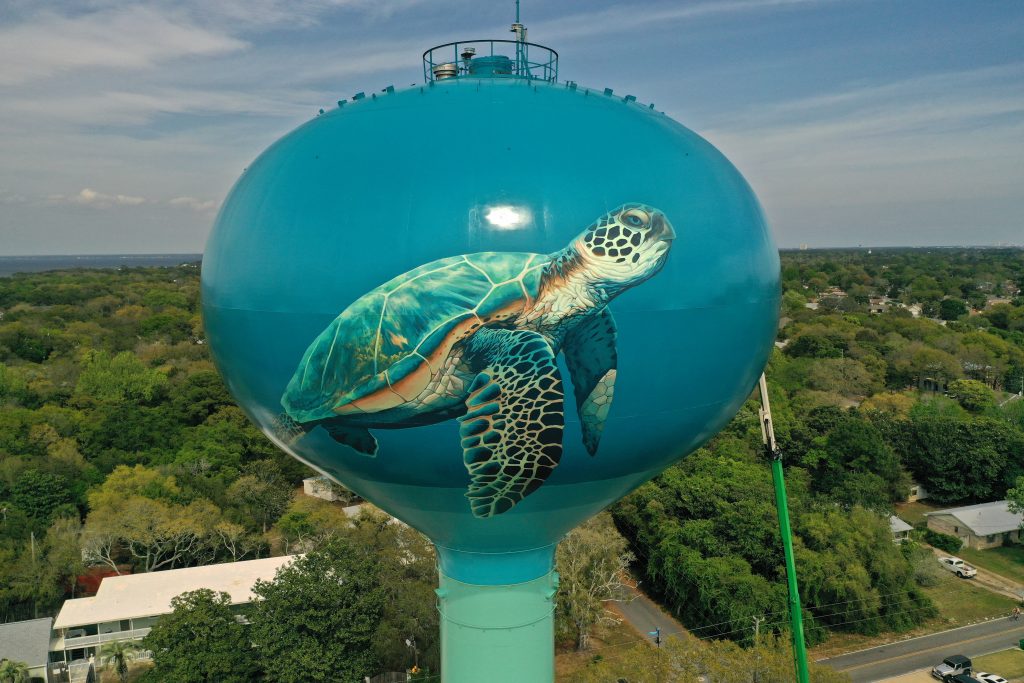 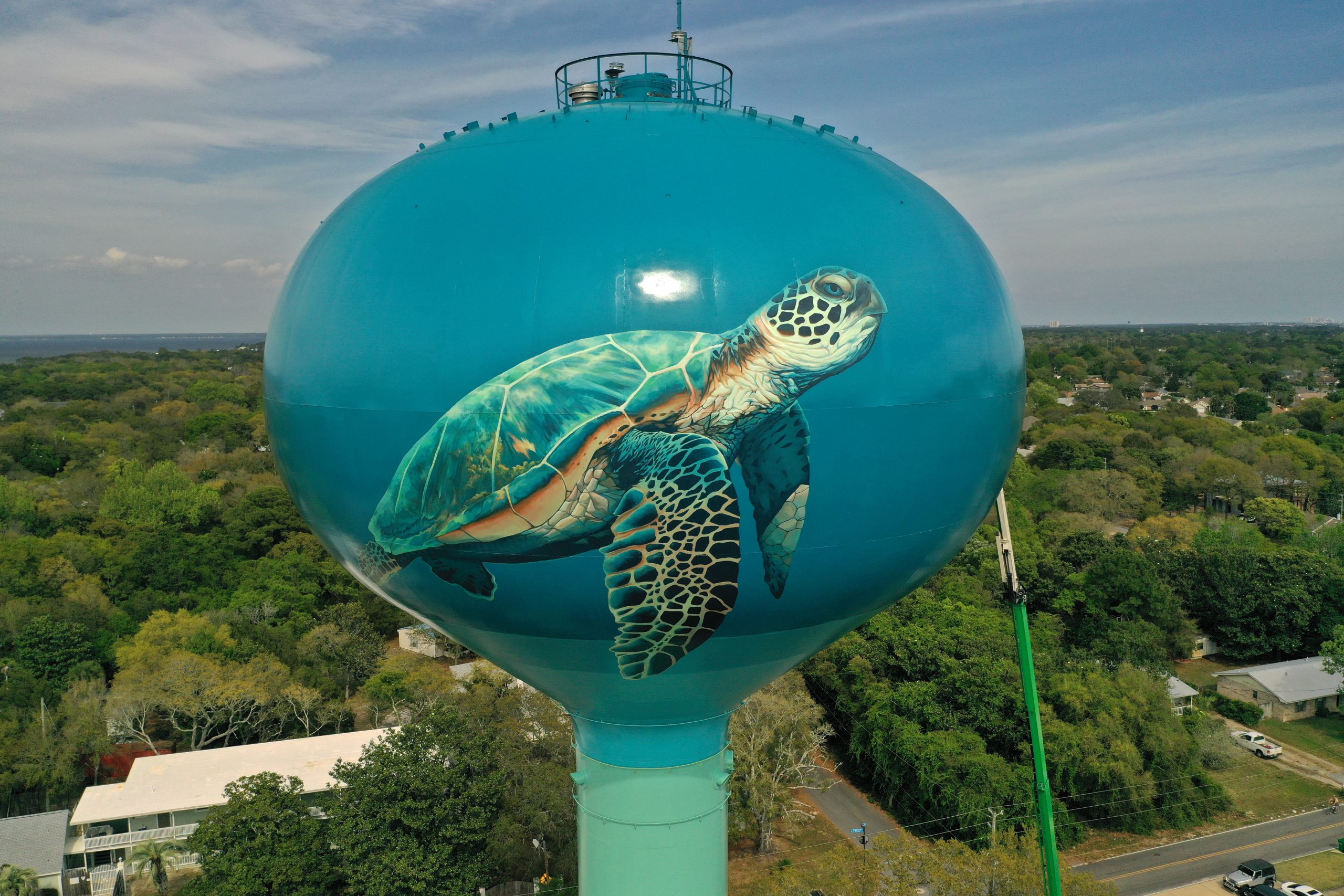 On Wednesday, June 24, Destin Water Users, Inc. (DWU) celebrated the completion of their newest water tower, Tower 5, with a valve turning ceremony honoring all of the companies and individuals who worked on the project. Located at 719 Forest Street, the celebration brought together representatives from each company who played a part in creating the new tower. Community members and DWU employees also attended to commemorate the new construction that will better suit their company and local community. Tower 5 is a 750,000-gallon water tank that reaches 169 feet into the air. It is able to take on more water from DWU inland wellfield and reduces the demand on coastal wells. It provides much needed storage, improves the operation of the distribution system, and provides enhanced firefighting protection for those service members in the area. Wednesday’s ceremony honored Poly Inc., who conducted the initial engineering report and crafted the design for the tower, along with Phoenix Fabricators and Erectors, who manufactured and erected the tank itself. The beautiful outer appearance of the tank is due to the combined efforts of American Suncraft and artist Eric Henn who painted the unique coastal mural consisting of local sea life. Originally from Dayton, Ohio, Henn began working on the mural on February 17, 2020. He creates his own patterns and uses various techniques with brushes and paint rollers in order to achieve a cohesive blending of colors. Henn created a stunning mural consisting of a sea turtle, dolphin, and various species of fish, scenes from the ocean floor, and a coral reef in order to cover the vast canvas of Tower 5. “Since the Tower is located in the heart of Old Destin, we wanted to paint something that paid tribute to the heritage of our community,” said DWU general manager Lockwood Wernet. The State of Florida’s Department of Environmental Protection was also honored at the ceremony as they provided a low-cost State Revolving Fund Financing to pay for the labor and staff who managed the project from its inception to completion. “We are honored to bring this project to life,” said DWU president Tom Weidenhamer. “As it aligns with our mission statement, we live and work in a little piece of paradise, DWU is dedicated to doing our part to keep it that way and continuing to ensure the future water supply for our members.” Photo DWU_Group1 (from left to right): Kevin Job, Water Operator; Judd Mooso, Water Superintendent; Jim Foreman, Director; Sandy Trammell, Director; Tom Weidenhamer, DWU President; Eric Henn, Artist; Jack Scelsi, Director; Jimmy Neilson, DWU Vice President; Jim Wood, DWU Secretary Treasurer; James Bramblett, Water Operator; Mike Brocato, Water Operator. Photo DWU_Group2 (from left to right): Jim Foreman, Director; Sandy Trammell, Director; Tom Weidenhamer, DWU President; Eric Henn, Artist; Jack Scelsi, Director; Jimmy Neilson, DWU Vice President; Jim Wood, DWU Secretary Treasurer . ### About Destin Water Users Destin Water Users, Inc. is private not for profit corporation, which is headquartered in Destin, Florida, with a service area covering most of the City of Destin and portions of unincorporated Okaloosa County, Florida. DWU is tax exempt under IRS code 501(c)12. The company provides service to over 12,000 people in the winter months and over 40,000 in summer months. To learn more about DWU, visit dwuinc.com. 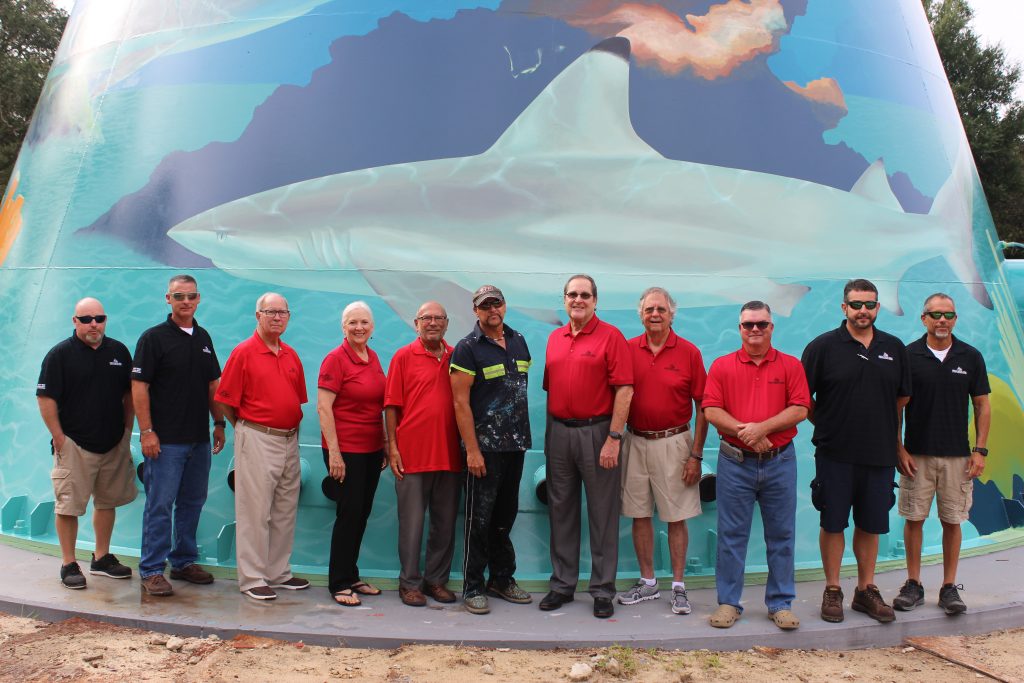