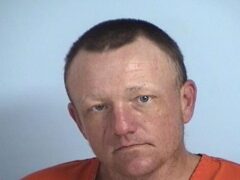 WALTON COUNTY, Fla— A Freeport man has been charged with felony animal cruelty after multiple witnesses say he was repeatedly hitting and throwing his dog.

October 20th deputies were called to the area of 1 Jefferson Street in Freeport after 9-1-1 calls about a man abusing a dog. When deputies arrived, they saw a tan dog running northbound near Jefferson Street.

The dog appeared to be scared and in pain.

A man, later identified by deputies as Jonah Kyle Brewer, was riding his bicycle chasing after the dog. When confronted, Brewer told deputies, “I don’t have time for you.”

When deputies explained to Brewer someone called to report him hitting his dog and he said “tell me who told you so I can beat him up.”

Deputies took statements from several witnesses who said they saw Brewer use his fist like a hammer to hit the dog in the face and then throw her into the air.

Brewer was charged with causing pain and suffering to a dog, a felony violation of Florida State Statute 828.12. He was arrested and transported to the Walton County Jail.

The dog, “Ella Gene”, was seized by Animal Control and is now being held for safekeeping at Walton County Animal Shelter.

Be the first to comment on "FREEPORT MAN CHARGED WITH ANIMAL ABUSE AFTER MULTIPLE WITNESSES SAY HE PUNCHED, THREW DOG"