A wake… no, not “awake”… a wake (according to Wikipedia) is the region of disturbed flow (often turbulent) downstream of a solid body moving through a fluid, caused by the flow of the fluid around the body. Or you could just say it is the waves caused from a boat. Near the Freeport Marina is a cute road sign in a residential area. This sign is a creative reminder for those driving through the neighborhood on their way to launch a boat. The sign reads “SLOW WAKE – 20 MPH.” Obviously, it is usually a boat in the water that creates a wake, not a car on the road. This sign serves as an admonition to proceed slowly and cautiously while traveling through the community. But after Hurricane Sally hit and the waterways overflowed the roads, the sign took on a literal meaning. With streets flooded out, cars were replaced with fishing boats taking residence back and forth to the subdivision’s entrance where vehicles were parked on the main road. It was some of the worst flooding in decades. 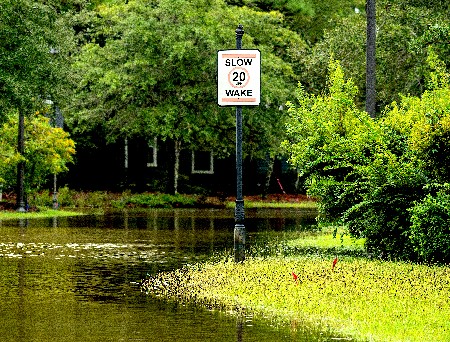 Every body… no, not “everybody”…every body of water has a purpose. Throughout our great country, there are numerous majestic bodies of water to see. Some are meant to be wondered at. Some are meant to be explored. A countless number of streams, rivers and lakes are used for canoeing or kayaking. Water is used for drinking, taking a bath, cleaning clothes, washing cars, mopping a floor, and even generating electricity. Water is also used symbolically. Many poems and great writings reference water. The psalmist David wrote “As the deer pants for water, so my soul longs for you.” The emotional attachment to water has a way of beckoning us back again and again.

Our bays, rivers, lakes and streams are treasures to be cherished, and they are to be left as undisturbed as possible. This is one reason why there are signs throughout congested waterways reminding boaters – SLOW DOWN – NO WAKE. If you’ve ever been in a small fishing boat when a vessel passes by going fast, you know how annoying it can be. Many times a driver of a marine vessel doesn’t even recognize when he is “rocking the boat” as he passes by. There are many environmental concerns, not the least of which is the erosion caused from wakes. But the worst wake of all is not from a boat. The worst wake has nothing to do with water. The worst wake can take place at an office, in the living room, or anywhere in public. What is so disturbing is it can be caused by you or me.

Are we “awake” to the wake we leave behind? I’m not talking literally, but figuratively. Did you know every room we walk into we leave a wake? Sometimes we may cause huge waves with one or two hurtful words. Other times we may cause constant erosion from little snide remarks full of negativity. Some people have no clue how big of a wake they leave behind and how inconsiderate they are to those they pass by, especially when carelessly sharing views on subjects such as politics, religion or sports. Hopefully, you and I will not be “one of those.”

Wakeboarding… no, not “wake boarding”… wakeboarding is a combination of skiing and surfing behind a boat. Some call it snowboarding without snow. In this case, a wake is a good thing. The trick is to stay above the wake. Just like we can leave a bad wake when we walk through a room, we can also leave a good wake. A compliment, a pat on the back and even a smile on our face can be a source of refreshment to others. Remember, people do not care how much we know until they know how much we care. They do not care how smart, successful or cleaver we are. They may never recall the words we share. But they will definitely remember how we made them feel when we were in their presence. That is our wake.

The post A Wake appeared first on South Walton Life | 30A News, Events and Community Information.