“The pastor told us, “Love is not a feeling; feelings change periodically. Love is a choice. And when you make that choice to choose love, even if you don’t feel like loving, you are choosing to love unconditionally. You recognize that we are all flawed creations, created for greatness.” —local Destin resident Myrna Conrad.

Since it’s February and Valentine’s Day is drawing near, let’s talk about love—the kind that makes time stand still—the kind that as human beings we dream to have, feel and experience. When we say we want to be “in love,” what we really long for is connection—to be accepted, supported, forgiven and cherished and have a safe space where we can be vulnerable, but still loved. We want a best friend and confidant—a love for the ages. And it does exist.

Depending on the lives we lead, we might be unaware of what a healthy relationship looks like. Is there an owner’s manual? When it comes to matters of the heart, we are all deserving of being in a great loving relationship.

These are the love stories of couples in our community—ones where, through commitment, have been shaped into the best versions of themselves. I hope they inspire you to believe in love, know you deserve love and, once you find it, that you are capable of choosing love every day.

“There is no fighting for victory; you are fighting from victory. When you place yourself on the alter, and every situation, you are allowing the part of you that just wants to be right, to die away. If you surrender it and let it go, change will come. The seasons that we go through, we wouldn’t be the same person today without them.” – Tiffony Miller 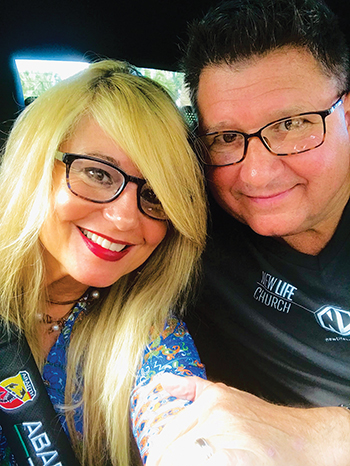 Robert and Tiffony Miller were married for five years, then divorced. But, after a decade, they remarried each other, now five years! They met in Alabama originally. He would see her driving around town. One day he saw her up front at church. After the service, he was having lunch at his pastor’s house. They were discussing why he hadn’t met anyone yet and asked him what kind of person he wanted. He thought for a minute and said, “Well, you know that girl that was up front today? I want someone like that.” Robert laughs as he tells it. He says his pastor recommended he write down everything he desired in a relationship and pray to God for that person. “Who knows,” he said, “maybe something is in the works.” It was. Tiffony caught his eye. Robert would see her at church and they would talk. She was a hairdresser in town, so he made a point to get 2-3 haircuts a week! Robert laughs again. Tiffony said he was always dressed to the nines in a white collared shirt. Every time he walked into the salon, she couldn’t help but blush.

They married soon after, but pain from a difficult childhood and difficult first marriage got in the way. “It was a constant struggle; his love was so good and it touched everything in me. And made me run in the opposite direction,” Tiffony says. Eventually they divorced and she moved to our area. She was desperate to be healed and for God to restore her life. So, she went on a path to healing and Robert continued to pursue her in the gentlest of ways, waiting for her to heal, though, at times, questioning himself, wondering if he was crazy to keep calling and coming to see her. Even when he went on a few dates they would say, “you’re not showing any interest, are you still in love with your ex?” And that was it, he was. He always felt he and Tiffony were meant to be, and he knew she would eventually come back to him. She finally did! Now they couldn’t be happier. Even people around them say they love the way she looks at him. You can’t help but to be filled with love and the power it has while listening to them tell their story. They spend each day being grateful for each other.

“I got gaps; she’s got gaps. And together we ain’t got no gaps.” — Bob Conrad from the words and wisdom of Rocky Balboa 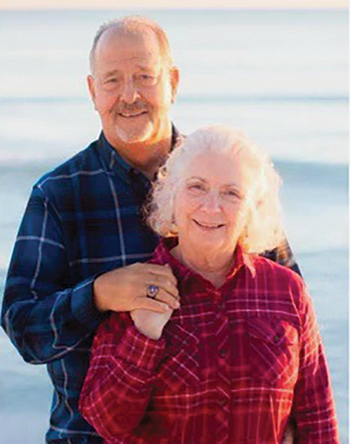 Myrna and Bob Conrad met while in school in Auburn University. She was a freshman, he was junior. They both worked at the same place on campus. He had just ended an unhealthy relationship and wanted to meet a nice girl—and there she was. So, he asked her out.

Myrna’s mother had warned her about good-looking Auburn guys, so somewhat leery, she declined. But he kept trying until she said yes. They went bowling on their first date, and he impressed her with all his strikes. The rest, as they say, is history. After six months of dating they were engaged, then married. They celebrate 50 years of marriage this June—50 years filled with 24 moves, two kids, starting and running their own business together, publishing books and now mentoring and coaching other couples about marriage together. Though there were a lot of ups and a lot of downs over the years, “God never gives you more than you can endure,” says Bob. “In the darkest times of your life, you wonder where God is. But when you get on the other side, you realize He was there all along. And you are stronger because of it.” At the lowest points in their relationship, they felt like giving up, but made a commitment that divorce was not an option. In those moments, they worked even harder. They learned to communicate and how best to respond, thus growing in their relationship together and with God. “Input comes at you from all directions and what you do with it is your choice,” Myrna said. “Attitude determines your behaviors; behaviors will determine your outcome.” And as they tell me their story while traveling in their RV, Bob and Myrna say that they are at their best today even after 50 years.

“You have to let yourself be vulnerable, and don’t go looking for it. The best ones find you. Our life together is definitely a love song, or better yet, all the love songs together.” – Chris Fichtl

I get to write my own love story and it’s one I have been ready to write my whole life. I am engaged! Like the words of the song by Matt Stell, “Cause every single day, before I knew your name, I couldn’t see your face, but I prayed for you.” 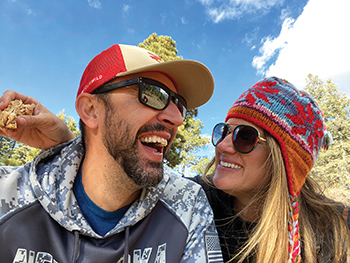 Chris and I met through one of my best friends (since 5th grade) and her husband, who has been Chris’s best friend for 10 years. I had been hearing about him and, apparently, he had been hearing about me, too—for years. And when divine timing aligned, he finally called me last fall. I had already been writing down and visualizing the man I wanted to meet. And it was apparent within the first few phone calls that he might be just that man. Our relationship began over the phone because of distance. But, because of that, we were able to build a foundation based on connection, communication and authenticity. We easily talked for three to four hours at a time. His friends and family even noticed and said they’d never seen him so happy. Non-disclosing at first, we kept our relationship a secret to give ourselves time to learn more about the other without any outside influences. Chris says he fell in love with me the first time we talked and that he has never been so completely happy and at peace.

It’s true we felt like we had known each other our whole lives. My friend had even told him that we would end up getting married. She felt we shared the same soul; she was correct. He was everything I wrote down I wanted, what I didn’t know I needed, and then some. Meeting in person the first time confirmed our connection and we knew we “had found the one.” Our lives, our kids and our families fit together like one big puzzle piece that had been there just waiting for us to pick it up. Chris says it’s like, “my soul saw you and kind of went, oh, there you are. I’ve been looking for you all my life.” The poet Rumi says, “Lovers don’t finally meet somewhere; they’re in each other all along.” I couldn’t agree more. I am so excited to marry this man. We both feel we are the luckiest to have each other in our lives and can’t believe the other is real, that we actually exist. His love is a gift, a blessing from God and I have promised to tell him that every day.

It’s a choice. Love is a choice, and we are committed to putting love first through it all. Love finds love. And it brought us right where we were meant to be, igniting within each of us a spark that beams from heart to heart.

When we consciously make the choice to choose love, we are also choosing to believe in love. Life wants to bless us. Life wants us to experience a deep love. It IS possible. It starts with hope coupled with trust, faith and surrender, softening when we want to harden, communicating when we want to blame. In choosing love every moment, we can. Choose love daily and feel the grace of God fill you up in ways you didn’t know were possible. Your love story is next.

The post Love Is A Choice appeared first on South Walton Life | 30A News, Events and Community Information.

Be the first to comment on "Love Is A Choice"