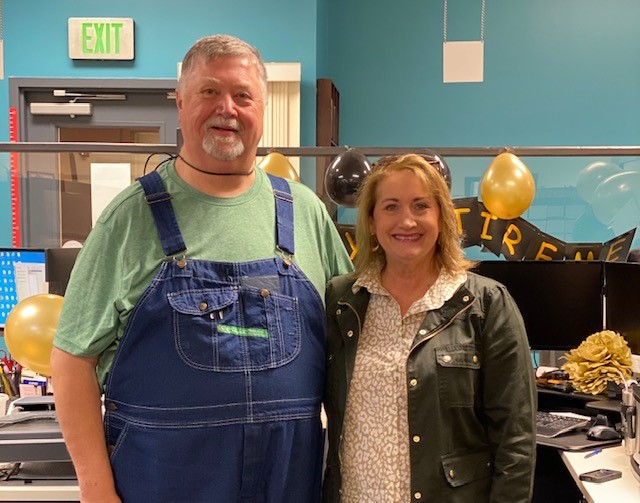 After 35 years of working with the State of Florida and the Walton County Tax Collector’s office, James Hallford, Driver License Administrator, will be issuing his last driver’s license today and will be stepping into the retirement phase of his life.

Since driver licenses were moved over to the Walton County Tax Collector’s office in 2012, James has overseen that section for the last nine years.

“James brought over with him a wealth of knowledge concerning the driver’s license field” says Rhonda Skipper, Walton County Tax Collector. “He is part of our work family and we will truly miss him. Especially the numerous great memories of laughter and friendship at our office.”

Driver’s License in the Beginning

James discussed how the Florida driver license has changed and evolved over the years from when he started back in 1986.

James recalls the costs for a driver license was approximately $10.00 and to get a replacement license cost $3.00.

James remembers when getting your Florida driver license in the 1980’s only required an eye exam, road test and written exam. The written exam consisted of 50 questions and 25 of those were identifying road signs.

“No certain documentation was required to prove who you were if you were a minor getting your Restricted License, you only needed to have your parents with you to advise who you legally were” said James.

“If you were an adult all you needed was a social security card with your name on it, which was the name that would be put on your driver’s license” James says. “There were also other documents people would bring in to identify who they were such as library cards, hunting & fishing licenses, family bibles and even birth certificates from hospitals with foot imprints on them,”

James says that things have changed over the last 35 years, especially since September 11th, 2001, which federal guidelines now requires you to prove who you legally are with a state issued document or passport. This is better known as the Federal REAL ID Act.

When getting a driver’s license now the cost is $54.25, and a replacement license is $31.25. The written test still consists of 50 questions but instead of 25 road sign identifiable questions, there is now only 5 questions.

James recollects when he started, the first driver’s license he issued was just a paper card with the driver’s information on it with no picture. Over the years the state moved to issuing a laminated card with a polaroid picture on it which was taken by the driver’s license office. “I remember having to change the chemicals in the polaroid machine periodically to freshen up the picture” James stated.

In the 1990s, Florida started issuing driver’s license on hard plastic with a digital image. It continually progressed to the current style it is today.

Over the years, James had numerous fun memories with most of them being during the driving tests.

“There was this one time when I explained to this young man about how his driving test was going to be conducted. I instructed him to go outside and wait in his vehicle. When I got outside, the young man was so nervous that he drove off and started the driving exam by himself and left me standing there with my clipboard on the sidewalk.” When the young man finally returned, James asked him “well, did you pass?”

James explained there have been so many more moments such as drivers running over street signs, jumping curbs, side-swiping parked vehicles in the parking lot and even traffic accidents.

James recalled being on a driving exam and the driver was driving above the posted speed limit and got stopped by law enforcement. The officer felt bad that the driver had already failed his exam due to his speed that he didn’t have the heart to write a citation.

James will be leaving the Walton County Tax Collector’s office today as officially retired but he will be leaving some fond memories and handing down his past knowledge of driver license to the new upcoming employees. “The last nine years working with Mrs. Rhonda Skipper has been a pleasure due to the office’s atmosphere, culture, and strong friendship I have with each one of my co-workers” James stated. “They will forever be my WCTC work family.”