“If you obey all the rules, you miss all of the fun.” – Katherine Hepburn 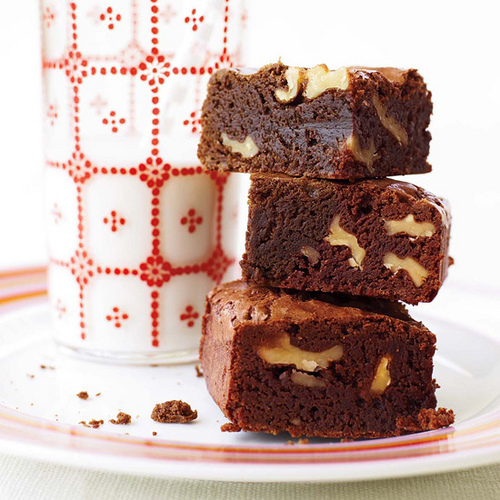 Katherine Hepburn, known for her wit and spunk as well as her impeccable acting, also has a brownie recipe of some fame. I began making these brownies about 2003 when my kids were 9 and 10. They loved them then, and still do today. The recipe was in Epicurious, and now is being circulated in the April issue of Relish magazine. Originally, the recipe accompanied an interview with the actress Katharine Hepburn in the August 1975 issue of The Ladies’ Home Journal. This brownie recipe, which calls for the smallest amount of flour, produces incredibly chewy bars with full chocolate flavor.

Recently my friends at California Walnuts sent me a nice sample of their delicious product- and a natural defender. I learned that more than 99% of the walnuts in the U.S. are grown in the fertile soils of California’s Central Valley. Internationally, California walnuts supply two-thirds of the world’s walnut trade. They are the only nut significantly high in Omega-3’s, and I found I loved them toasted as a snack, and as a crunchy alternative to croutons for salads.

You can cut these brownies into squares, once they have cooled, and eat them out of the pan, but it is so much nicer to pile them on a fancy plate, from which people are going to eat them with their hands anyway. If you want to smarten up your act you can put a square of brownie on a plate with a little blob of créme fraîche and a scattering of shaved chocolate.

The post 30 A Eats.com Recipe of the Month; Katherine Hepburn’s Brownies appeared first on South Walton Life | 30A News, Events and Community Information.

Be the first to comment on "30 A Eats.com Recipe of the Month; Katherine Hepburn’s Brownies"