Don’t Give Up! Give Back

While incarcerated, Destin resident and Army veteran Geoff Speyrer never dreamed he’d one day be a champion of bringing hope and awareness to veteran suicide. But now he is!
Sadly, 22 veterans and active-duty members per day take their lives thinking there is no hope. 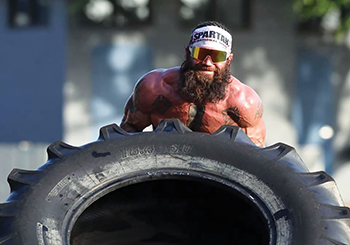 But Geoff has set out to change this, showing that there IS help and hope, by raising money for Healing Paws for Warriors through his physical endurance—no small feat for a man who sustained injuries from being near explosives while serving in the military.

The medical care he received adversely affected his health, which resulted in a life-long injury due to lower leg trauma and surgery.

He was told his chances of running again were reduced and he began to experience the challenges of Post-Traumatic Stress (PTSD) and Traumatic Brain Injury (TBI). After leaving the military and becoming a fugitive, Geoff spent the next 13 years in and out of incarceration and treatment facilities. However, Geoff says it was during these darkest years that he turned his life around instead of becoming a statistic and taking his own life. Geoff found health and wellness as a tool to overcome this adversity. 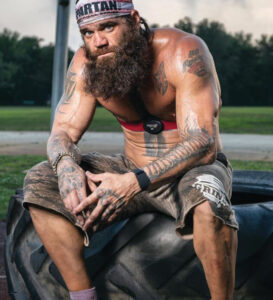 And run again, he did! Geoff races to give back to his community after battling the addiction, PTSD and suicidal thoughts. He uses his strength and endurance to help other veterans facing the same challenges through Healing Paws for Warriors, a local veteran-founded nonprofit that provides trained service dogs at no cost to veterans who are faced with post-traumatic stress, traumatic brain injury or military sexual trauma.

For the second year in a row, Geoff completed a grueling 24-hour physical challenge and ran 26.2 miles, biked 100 miles and raised approximately $12,000 for vets in one day! The event is called SET 22—the SET stands for strength, endurance and training and the 22 refers to the number of veterans who take their lives every day. 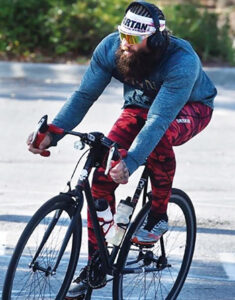 Beginning at midnight Friday, May 21, at Harbor Tavern in Destin, Geoff and fellow cyclist friends made four loops by bike around Destin and Scenic Hwy. 98 for a total of 100 miles! Then at noon on Saturday, he and several other runners made one more loop around Destin by foot, racking up a 26.2-mile marathon. And last, but certainly not least, at approximately 9 p.m., Geoff flipped a 200-lb. tractor tire around the Destin Elementary School track for one mile, where he was joined again by 25 to 30 people who cheered him on in the dark. He finished the challenge at roughly 10:45 p.m. Saturday, May 22. “As the tire continued to flip with each turn of a “thud,” bystanders were reminded that he is an American soldier who sacrificed and proudly served his country,” says Sheila Hale, Healing Paws for Warriors co-founder/deputy director. “Today he served his community by providing awareness to end veteran suicide, encouraging veterans to push through as there are resources for help.” ALL of these amazing feats were accomplished in a 24-hour period!

You might ask why Geoff would go through this grueling ordeal. “I know what it feels like to have no hope. It’s all about giving back HOPE to these men and women who suffer,” he says.

Geoff says his friends are what kept him going. “I have some of the most diverse, amazing, supportive people as friends!” Many flew in and ran with him from all over even as far as New York, New Jersey and Missouri. “I got zero sleep prior to the event taking off and it was all worth it. I truly wouldn’t have it any other way,” says Geoff. “I stayed mindful and present throughout the entire stay. I never wore headphones to get out of pain or get in the zone. I simply just talked to my friends. I’m so grateful for all of you!”

“We couldn’t have done it without community support from businesses such as Okaloosa Gas,” says Sheila. “We had over 15 businesses alone to help support the event shirt which got us started and then held the fundraiser on Facebook.”

“Geoff is representative of Don’t Give Up! He has a huge heart, and wants to give back to his local community,” Shelia says. “He chose Healing Paws for Warriors to support a veteran K9 team and to help veterans themselves. “If I can do this no matter how bad life can be, you can do it, too,” says Geoff. “He is the example of a great American soldier,” Sheila says.