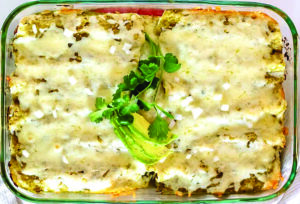 Enchiladas Suizas translates from Spanish to English as “Swiss Enchiladas” and is believed to be a nod to the Swiss immigrants to Mexico years ago who established dairy farms there.

This recipe was introduced to me by my sister, Ginger, while I was on a vacation that I took to visit her in Colorado with my mother, long before marriage and babies entered the picture.

I was captivated by the flavors, and once home started making the dish myself when entertaining, tweaking a few ingredients.

I now make this recipe several times a year, and always at Christmas, as the red and green peppers make the dish so colorful, as does the addition of the green salsa.

My children, now grown and married, also love to make the Chicken Enchilada Suizas and enjoy sharing our family recipe with their friends.

This is the perfect dish to take a family grieving, or celebrating a new birth, as it freezes well too!

Preparation
Bring a pot of lightly salted water to a rapid boil over medium-high heat. Add the chicken to the boiling water; cover. Cook 15 to 20 minutes; drain and set aside. OR purchase two original rotisserie chickens and chop white meat only then set aside.

Place about 1/3 cup of the chicken mixture along the edge of a tortilla; roll tightly into a tube. Place the enchilada, seam-side down, into the prepared baking dish. Repeat until all the chicken mixture is used. Sprinkle Monterrey Jack cheese over the enchiladas. Whisk together the whipping cream and chicken broth in a small bowl; pour over the enchiladas. Cover the dish with aluminum foil. (Poblano Peppers may be used in place of tortilla shells).
Bake in preheated oven 30 minutes. Remove foil and continue baking until cheese is completely melted, about 10 minutes. Poblano peppers cook 45 minutes covered and 10 uncovered.

Note: If using poblano peppers, only use 1/2 cream/chicken broth mixture to top for the full recipe, or 1/4 for half the recipe. The tortillas soak up the liquid mixture when cooking, but the peppers emit their own juices making it more runny with the peppers.
Photo Credit: HungryBlueBird.com

Be the first to comment on "Recipe: Susan’s Famous Chicken Enchilada Suizas"