The Northwest Florida Symphony Orchestra (NFSO), housed at the Mattie Kelly Arts Center in Niceville, has a new conductor. After 18 months of meticulous searching, Todd Craven has been named NFSO Music Director and Conductor right in time for the orchestra’s 35th season. 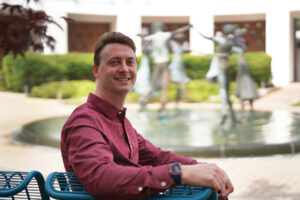 Craven hails from Flint, Mich., where he attended the Flint Institute of Music and then went on to the University of Michigan. As for his musical career, Craven has held the position of Assistant Conductor of both the Buffalo Philharmonic and the Florida Grand Opera and was the Co-Founder and Music Director of the Orlando Contemporary Chamber Orchestra. He has also led many orchestras across the country as guest conductor, most recently at the Toledo Symphony Orchestra in Toledo, Ohio.

What do you most look forward to in this area of Florida?

I look forward to being near the water again. Also, my wife and I are looking forward to getting to know the people and becoming a real part of the community.

What do you hope to bring to the orchestra that will be new and different from years past?

The ﬁrst step for me is to program and lead outstanding concerts for the orchestra’s 35th anniversary season. Beyond that, I imagine introducing projects that engage with the community on a deeper level. This will entail the musicians of the NFSO performing in diﬀerent venues. I also look forward to introducing some new community and educational initiatives.

If you could pick only one style of music to listen to for the rest of your life what would it be?

My musical tastes are pretty eclectic, actually. I love to relax to jazz and some popular music. My passion lies in classical orchestral music. I never tire of listening to the music of the great American composers Copland, Barber and Bernstein or that of the European Masters Beethoven, Brahms, Mahler and Tchaikovsky.

What inﬂuential experience(s) made you decide to pursue a career as a conductor?

I began my professional career as Principal Trumpet of the Sarasota Orchestra. When I participated in my ﬁrst conducting masterclass almost a decade ago, I was profoundly aﬀected by the realization of how the conductor can inﬂuence and shape the sound of an ensemble.

Do you play any instruments? If so which ones and do you have a favorite?

Obviously, I’m still drawn to the sound of the trumpet, but I have developed a knowledge and love for every instrument of the orchestra.

What is your favorite musical experience that you have had in your life thus far?

I have been fortunate to have had many wonderful musical experiences as both a player and conductor. More recently, I had the opportunity to conduct the Buﬀalo Philharmonic in a multi-media work called Ellis Island: A Dream of America by composer Peter Boyer. This concert also incorporated stories of local immigrants who found their way to the U.S. from war-torn countries under very diﬃcult circumstances.

Be the first to comment on "Meet the Maestro!"