Load up your boats, make history and join Boaters for America 1st as it hosts a Patriot Boat Parade on Sunday, Sept. 5, 2021, in an attempt to break the world record for largest boat parade. Powered by Right Side Broadcasting Network (RSBN), staging will begin from 9:15-9:45 at the west side of Brooks Bridge in Fort Walton Beach and end at the Destin Bridge. An electronic counter will be positioned under Brooks Bridge to count each boat registered. The American Spirit and other boats will lead the way again and thousands are expected to join.

“We’re an independent event,” says co-organizer of the event Anne Ziegenhorn, “and we’ve hired a professional audit team to verify and certify our parade.” 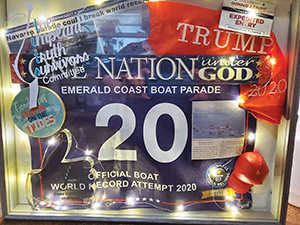 As some readers might remember, last September, an attempt was made to break the Guinness Book of World Records with a Sept. 5, 2020, boat parade. “We feel we broke the record,” says Anne, “with 1,528 officially registered, and over 2,000 showing up. But Guinness didn’t recognize it.” (Malaysia currently holds the official Guinness record for Largest Boat Parade with 1,180 boats.)

Anne says last year’s attempt was to counteract all the negative press. “We wanted Trump to know there’s a lot more people out there supporting him than the media is letting on. Obviously, we wanted to break the record, too, but mainly that.” Chandra says when others saw the parade on the bridge and in the water, it renewed their spirit. It was so opposite of what was being aired on the MSM.

Anne and friend Deidre Cannon are ‘I’m a Florida Trump Girl’ admins who have been planning the boat record attempt since shutdown in March 2020. “So, this year we’re going for it again,” says Chandra, “but, it won’t involve Guinness.”

The cost per vessel is $22 to register and funds raised through the event will benefit two non-profits: TITS Committee 501c3: The Implant Truth Survivors Non-Profit Charity, of which Anne is a co-founder, and Road Dogg Rescue. “Once registration, accountants and other incidentals are paid for, anything above that will go to the non-profits,” says Anne.
“Last year, we had people from all over the country participating with at least 13 states represented,” says Chandra, “from Alabama, Alaska, even Canada!

With several sponsors already lining up, Gas MONKEY Propane and Right Side Broadcasting have stepped up as primary sponsors and hosts. Others include, the American Spirit Party Boat, About Face: A Therapeutic Skin Care Center, Dock & Deck Techs, James O’Donoghue of Nautilus Civil Technologies, Fubar and The Island Hotel by RL.

Anne invites like-minded boaters who like to have fun to join and invite friends, locals and others from other states to come together in unity. “Through this year’s Flotilla, we want Trump to know we want him back and that he has our full support.”

Be the first to comment on "Patriot Boat Parade Coming To Destin for a World-Record Attempt Sept. 5"