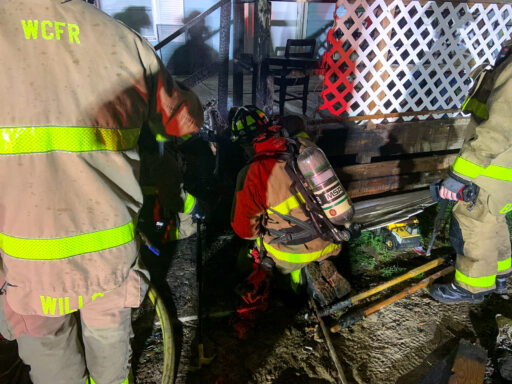 A neighbor spots flames coming from underneath the porch of a nearby home and quickly jumps into action.

At 10:35 p.m. on Tuesday, March 1, 2022, Walton County Fire Rescue responded to a home on Hansen Road in Freeport following a 911 call from a neighbor who could see flames coming from underneath the front porch. While on the phone with a Walton County Sheriff’s Office communications officer, the neighbor tried banging on the door, because she believed the family of five were asleep inside. The neighbor’s son began trying to extinguish the flames with a fire extinguisher while the woman continued to try to wake the family.

Walton County Fire Rescue arrived on scene within a few short minutes to find a small fire coming from the front porch of the home. Firefighters were able to quickly contain the fire before it spread to the rest of the mobile home, saving the family’s home from internal damage. Fortunately, all residents made it out of the home safely.

Upon investigation, Walton County Fire Rescue crews found that an overloaded extension cord was the cause of the fire.