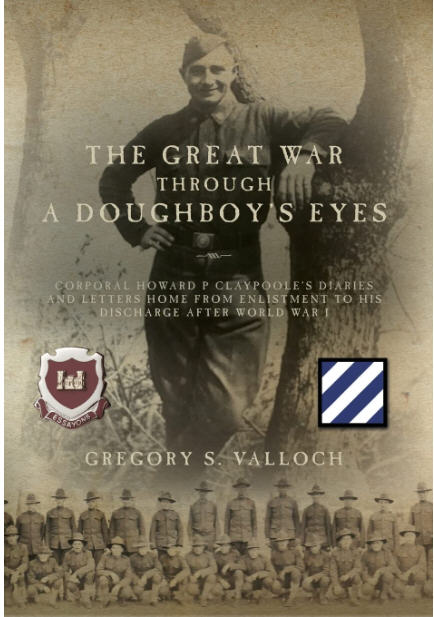 “The Great War Through a Doughboy’s Eyes” by Gregory S. Valloch

MIRAMAR BEACH, Fla.– “The Great War Through a Doughboy’s Eyes” was released on March 23, 2022 and chronicles the service of Corporal Howard P. Claypoole, told through the lens of his grandson and Miramar Beach local, Gregory S. Valloch.

Corporal Howard P. Claypoole served in the U.S. Army during WWI and was awarded The Purple Heart posthumously. Like his grandfather, Colonel Gregory S. Valloch also served in the military and is a U.S. Army veteran who honorably served during the Gulf War. Since then, Valloch has become a Destin local and has owned the Ben & Jerry’s ice cream shop, located in The Market Shops, since 2016 and has been named as the “Best Dessert” by the readers of VIP Destin Magazine in 2018, 2019, 2020, and 2022. He is a member of the Destin and Walton Area Chambers of Commerce as well as the American Legion Post 96.

In “The Great War Through a Doughboy’s Eyes”, Valloch offers a unique account of his grandfather’s service during WWI, illustrating the hardships of soldiers at war. Utilizing his grandfather’s diary entries, postcards, letters, wound order, newspaper clippings, military history, and discharge papers, Valloch tells the story of a man with an unwavering allegiance to his country and a will to survive. Corporal Claypoole’s journey is brought to life through photographs of wartime memorabilia, including playing cards, pictures, dice, dog tags, medals, bayonets, coins, his rifle sling covered with unit crests, his Purple Heart, and his WWI Victory Medal and campaign clasps.

“This is the story of one man who fought in the Great War, came home, got married, and had a successful life,” Valloch said. “But he also found friendship and life lessons forged in battle that stayed with him until the very end. And that is what I want to relate.”

“The Great War Through a Doughboy’s Eyes” is available for purchase online on Amazon.

### About Gregory S. Valloch Colonel Gregory S. Valloch was commissioned a second lieutenant in the U.S. Army and as an armor officer upon graduating from Norwich University as a Distinguished Military Graduate. He served in the Tiger Brigade (1st Brigade, Second Armored Division) during Desert Shield Desert Storm. He left active duty and joined the U.S. Army Reserve where he served as an operations officer, plans officer, and then spent a year deployed to Al Udeid Airbase in Qatar as the plans division chief in the 2nd Battlefield Coordination Detachment. He was selected for Battalion Command and commanded the 1st Battalion 411th Regiment Logistics Support Battalion. (LSB). He was selected for colonel, and served until his retirement in 2013 as the deputy commander of the USAR Consequence Management Unit located in Abingdon, Maryland. In 2016, he opened a Ben & Jerry’s shop in Miramar Beach, Florida. When he’s not scooping ice cream, his hobbies include golf, coin collecting, and spending time with his golden retrievers Jeb and Shelby. He is married with two grown children.

Be the first to comment on "Local, Gulf War Veteran Honors Grandfather’s Legacy in New Book"