The Harbor Rats Charitable Foundation, an organization founded on giving back to their community, has chosen Alaqua Animal Refuge as one of their beneficiaries.

“As we were looking to expand our reach and choose another charity to add as a beneficiary, Alaqua was a clear and unanimous choice” said Marvin Holthouser, chairman of the Harbor Rats Board of Directors.

The Harbor Rats Charitable Foundation started with a group of local businessmen who met at Harbor Cigars in Destin for fellowship and decided to positively impact the community in which they lived. Harbor Cigars, owned by Holthouser, has been the gathering spot ever since. Established by a handful of his customers, the Harbor Rats group now has approximately 125 members and six board members.

Harbor Rats hosts a variety of charity events and an annual golf tournament to raise funds and are looking forward to hosting a joint event for Alaqua in the future. The Harbor Rats Board of Directors recently visited Alaqua for a grand tour of the new facility and presented a $10,000 check to the organization in support of past and future efforts.

The Harbor Rats believe that ‘giving back makes us all better,’ stating that any opportunity to leverage the many talents and resources of the group towards improving lives in the community is their goal.

Adding Alaqua as a beneficiary is another step in their achievement, building on their success and expanding their impact in the community.

Alaqua Founder Laurie Hood said, “Marvin called us and wanted to come out and meet with us and tour the property. We had such a great time learning about their organization and sharing both of our plans for the future. They were truly a breath of fresh air, and we are excited to partner with them.”

About Alaqua Animal Refuge Alaqua Animal Refuge is a no-kill animal shelter and sanctuary, located in the panhandle of Florida. As the Southeast’s premier 501(c)3 refuge, Alaqua believes that every abused, neglected and homeless animal deserves a second chance. Committed to providing protection, shelter and care to animals in need, this private, non-profit Refuge also offers an adoption center, veterinary clinic, educational outreach, and community programs that extend far beyond their geographic location. Since its inception in 2007, Alaqua, led by Founder Laurie Hood, has become a recognized leader in animal rescue, welfare, cruelty prevention, and advocacy. Alaqua is currently in the midst of a relocation and expansion capital campaign to build a one-of-a-kind facility—the first in the United States—on 100 acres. The new facility and sanctuary will allow Alaqua to continue to do the important work of animal rescue and rehabilitation, as well as be an educational and training center for animal welfare advocates as a place that will inspire, empower, and educate others to make change in our society and recreate the model worldwide. To learn more, visit http://www.alaqua.org/ 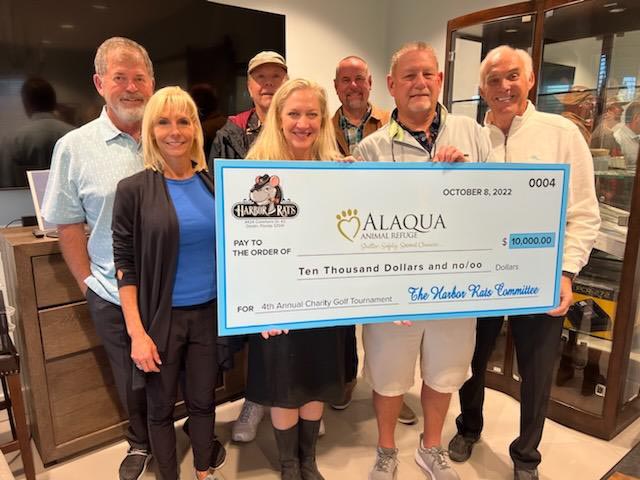