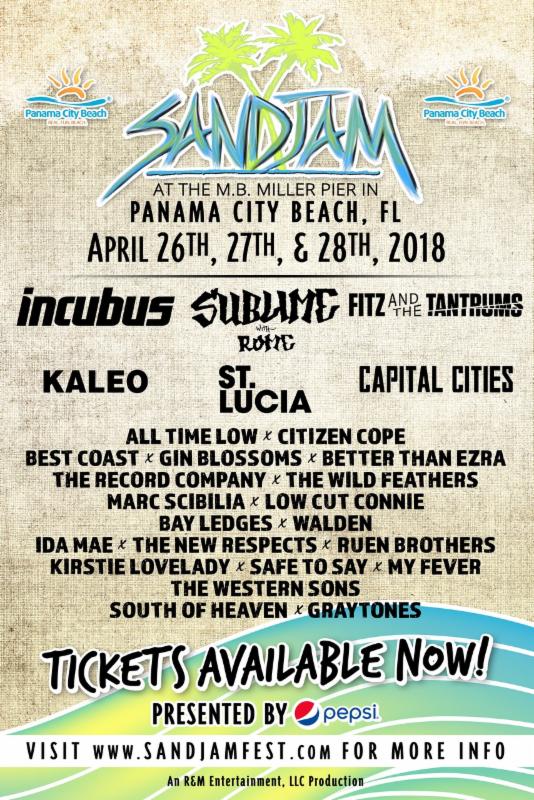 Sublime with Rome and Fitz and the Tantrums were recently announced as the headliners for the inaugural SandJam Fest Presented by Pepsi adult-alternative rock music festival in beautiful Panama City Beach. This morning organizers announced an additional 20 acts will join the headliners and already announced Kaleo, St. Lucia and Capital Cities on the sugar-white sand at M. B. Miller Pier April 26-28, 2018.

All Time Low, Citizen Cope, Best Coast, Gin Blossoms, Better Than Ezra, The Record Company, The Wild Feathers, Marc Scibilia, Low Cut Connie, Bay Ledges, Walden, Ida Mae, The New Respects, Ruen Brothers, Kirstie Lovelady, Safe To Say, My Fever, The Western Sons, South of Heaven and Gray Tones have all been confirmed to perform.
Unique to SandJam Fest Presented by Pepsi, the festival will feature opposing stages set right on the sand. “We’ll have an act perform on one stage, and the next act will perform on a stage about 250 yards away,” said Executive Producer Rendy Lovelady. “This will be exciting for our Jammers, as they’ll have non-stop music throughout the day and into the night.”
Tickets are currently available. Three-day General Admission and Military tickets are currently $129. Military ticket prices will not increase but are limited in number. VIP tickets, which include access to the area directly in front of the stage, exclusive entry line to festival grounds, air-conditioned restrooms and more, are currently $359. VIP and General Admission will be $189 and $439 at the gate.
Cabanas offering gulf front views and strategic stage views will also be available. The very limited Cabanas accommodate up to eight people and include a backstage path/walkway, four drinks per day and free draught beer, two parking passes, personalized staff and much more. Fans interested in the Cabanas may inquire here.
Gates will be open at 4 p.m. on Thursday, April 26, and music will begin at  5:15 p.m. Friday and Saturday gates will open at 1 p.m. with music starting at 2 p.m.
For information on purchasing tickets, shuttles, travel and more, visit www.sandjamfest.com. For special promotions and giveaways, stay tuned to Facebook, Twitter and Instagram