July 9, 2021 – Santa Rosa Beach, FL – For the past 12 years, the 30A Songwriters Festival has attracted thousands of die-hard live music fans from around the country to hear original songwriters spanning many genres of music perform their songs. The beach resort towns along Highway 30A on the Gulf of Mexico feature 30 venues presenting over 230 songwriters and 300+ solo, band and in-the-round performances throughout the weekend of January 14 – 17, 2022.

30A Songwriters Festival will celebrate its 13th year with performances on the main stage at presenting partner Grand Boulevard’s Town Center in Miramar Beach with headline performances by renowned artists BROTHERS OF A FEATHER (feat. CHRIS & RICH ROBINSON of the BLACK CROWES), MAVIS STAPLES, EMMYLOU HARRIS, DAWES and JENNY LEWIS.

We are especially happy to welcome AMY GRANT and RICKI LEE JONES to the 2022 30A Songwriters Festival for the first time. Returning to perform two shows each throughout the weekend are songwriting legends RODNEY CROWELL, PATTY GRIFFIN, STEVE EARLE, JOHN PAUL WHITE (The Civil Wars), GARY LOURIS (JAYHAWKS), SHAWN MULLINS and DAR WILLIAMS!

Dueling rockstar brothers Chris and Rich Robinson formed The Black Crowes in 1984, penning several hit songs and becoming renowned on the live music circuit all before the age of 23. But over a storied career that saw the release of eight studio albums, four live albums, and over 35 million records sold, the brothers continuously butted heads, calling it quits forever in 2013; each brother vowed to never play or speak with the other again. This January, Chris and Rich will reunite on the mainstage at Grand Boulevard as Brothers of a Feather, an acoustic duo, and perform their classic hits from “She Talks to Angels” and “Twice as Hard” to “Remedy.”

Mavis Staples is the kind of once-in-a-generation artist whose impact on music and culture would be difficult to overstate. She’s both a Blues and a Rock and Roll Hall of Famer; a civil rights icon; a Grammy Award winner; a chart-topping soul/gospel/R&B pioneer; a National Arts Awards Lifetime Achievement recipient; and a Kennedy Center honoree. She’s collaborated with everyone from Prince to Bob Dylan. A legendary live performer, she will treat the 30A audience to a string of The Staples Singers’ classics in addition to selections from her recent trio of acclaimed albums made with Wilco’s Jeff Tweedy.

Emmylou Harris returns to serenade the 30A mainstage with her incomparably expressive voice and eloquent, straightforward songs that first shook up country radio in the 1970s, cementing her place as the premiere songwriter of a generation. Over her career she’s sold more than 15 million records and garnered 14 Grammy Awards, three CMA Awards, and four Americana Awards in the process.

Dawes will showcase songs from their latest critically acclaimed album, Good Luck With Whatever (recorded at the historic RCA studios in Nashville Tennessee with six-time Grammy-award winning producer Dave Cobb). The Los Angeles-based group is one of the finest folk rock bands of the modern era — just ask their forbearers. Studio collaborators include Jackson Browne and Benmont Tench (Tom Petty & the Heartbreakers). Such signature songs “Time Spent in Los Angeles” and “All Your Favorite Bands” evoke a classic Laurel Canyon sound for the new millennia.

Jenny Lewis established herself as indie rock royalty as the frontwoman of Rilo Kiley, but as a solo artist she has blossomed into a singular, contemporary singer-songwriter. The New York Times calls her “a stylish performer who defies genre and salts her songs with a sly and off-kilter intelligence.” Her latest record On the Line features performances from Ringo Starr, Beck, and Don Was (The Rolling Stones).

Rickie Lee Jones will make her 30A debut fresh off the release of her memoir, Last Chance Texaco, released in the spring of 2021. Her chronicles are “as rich and colorful as Jones’s best lyrics,” writes The New York Times. The two-time Grammy winner, known for her haunting voice that ranges from deep yearning to late-night sultry, first appeared on the Los Angeles scene in the mid-1970s penning instant classics like “Chuck E.’s In Love,” “Danny’s All-Star Joint,” and the pivotal breakup album Pirates.

Co-producers Russell Carter and Jennifer Steele commented on the 2022 30A Songwriters Festival:

“2022 marks the 13th year of producing the 30A Songwriters Festival. It began as a small event and grew quickly into a premier one-of-a kind musical showcase for world-class songwriters. From the start, the Festival has been a benefit for the local nonprofit Cultural Arts Alliance of Walton County.” Russell Carter, President of Russell Carter Artist Management and Festival Co-Producer points out that “this year — 2022 — we celebrate a New Morning. In honor of this theme, select musicians will showcase Bob Dylan’s classic album, New Morning, performing all of the songs in the original album sequence.”

“Anticipation for the 2022 30A Songwriters Festival is dramatically stronger than ever after 15 months of postponed shows due to the pandemic,” said Cultural Arts Alliance Executive Director and Festival Co-Producer Jennifer Steele. “The Cultural Arts Alliance has been instrumental in establishing a rich and rewarding culture of creativity that enhances our community’s quality of life, and we are eager to re-engage in person with our wonderful music enthusiasts, both fans and performers from all over the country, in support of the Arts.”

Festival Weekend Passes are currently available at www.30asongwritersfestival.com. VIP tickets that include premium seating on the lawn at Grand Boulevard for the headline shows on Saturday and Sunday afternoons along with access to the VIP tent serving complimentary food, beer, wine and cocktails are also available. For a full description of each ticket package including VIP mainstage and transportation packages for groups of 2 up to 12, visit www.30asongwritersfestival.com.

Russell Carter Artist Management is a full-service artist management firm that has worked with national recording artists since 1990. Prior to forming RCAM, Russell Carter practiced entertainment law in Atlanta for ten years. RCAM books and promotes the 30A Songwriters Festival and co-produces it together with the Cultural Arts Alliance of Walton County and co-produces the Opelika Songwriters Festival in Alabama with the Sound Wall.

About the Cultural Arts Alliance of Walton County

The Cultural Arts Alliance of Walton County, Inc. is the officially designated local arts agency that advances the arts through leadership, advocacy, funding, programs and education. As the creative core of our community for 27 years, the CAA provides accessible opportunities for all forms of art, every variety of maker, all levels of learners and art lovers. Through support for and presentation of creative and educational programs and services, the CAA strives to connect the people of Walton County to a broader view, critical exploration and answers only the Arts have the power to provide. Members of the CAA receive a 10% discount off weekend passes and admission to an exclusive performance on Wednesday, January 12th. Call (850) 622-5970 to become a member and take advantage of the discount. www.culturalartsalliance.com. 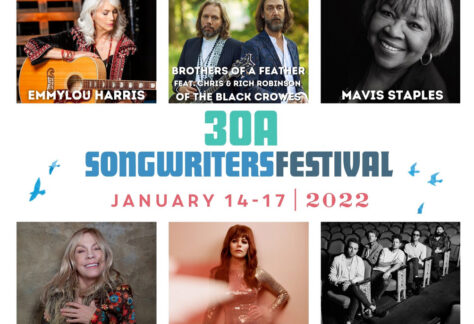 The post 30A Songwriters Festival Announces First Round of 2022 Lineup appeared first on 30A.TV.