The community of WaterColor, an upscale subdivision in Santa Rosa Beach, has 24-hour security patrol. The teens circulated a flyer advertising the party

FIRST ON FOX: The Florida owner of an $8 million home that became the site of a wild, unauthorized house party, said the revelers stole a $1500 bottle of wine, a $3,500 Yves Saint Laurent purse and a football signed by former Colts quarterback Peyton Manning.

“They went in every inch of my home, every drawer,” said the owner of the Santa Rosa mansion, who lives there full-time with her husband, 10-year-old son and 5-year-old daughter. “They were trying on my clothes, my shoes, my swimsuit. They stole my handbags.” The haul included the YSL, as well as Gucci and Stella McCartney purses.

The woman, who asked that her family not be identified by name, said their older kids, who are 15 and 20, do not go to school in Florida and didn’t know the teens at the party.

“It’s not the material things, it’s the memories,” said the stay-at-home mom, whose husband is an oil executive. “The amount of invasion of privacy was just – there was no regard for anything. It was a complete violation.”

The owners are avid wine and liquor collectors, and the teens raided their cellar, downing a $1500 bottle of Ace of Spade champagne, snatching a bottle of 1942 Don Julio tequila and dozens of other bottles valued at thousands of dollars.

“They were in every single one of our beds,” the owner said. “They were in all my children’s beds, they were in our bed. There were footprints in our bathtub.” 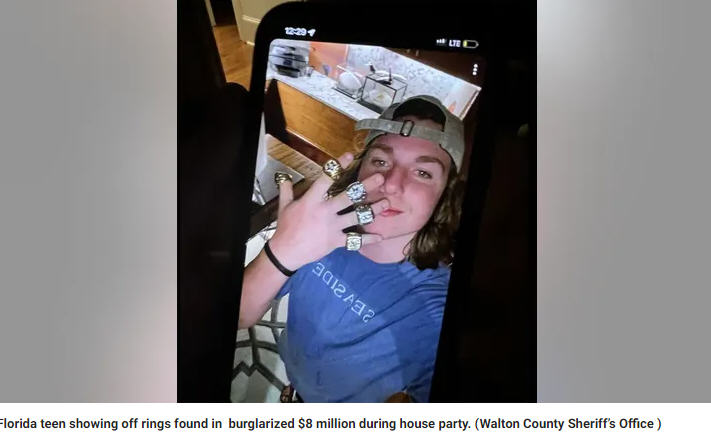 Be the first to comment on "Florida homeowner speaks out after teens break in to $8 million mansion, throw massive rager"