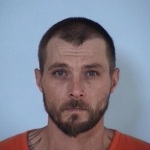 Choctaw Beach, Fla— Three people are behind bars following the discovering of meth at a home off Cedar Avenue in Walton County.

On February 14th members of the Walton County Sheriff’s Office VICE/Narcotics Units, along with members of the Florida Department of Corrections Probation and Parole completed a search of 341 Cedar Ave in the Choctaw Beach community.

During the search, more than 14 grams of methamphetamine was discovered, along with several items of paraphernalia.