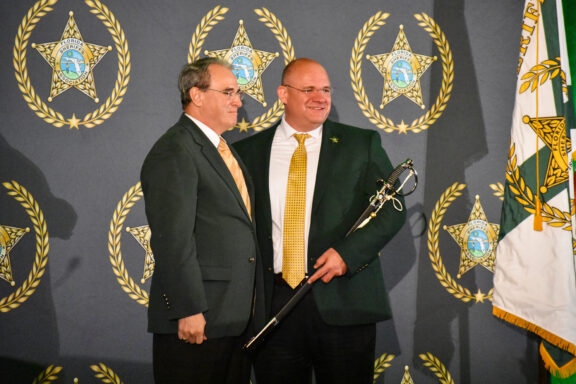 WALTON COUNTY, Fla— Sheriff Michael Adkinson’s term as President of the Florida Sheriffs Association ended Tuesday as he turns over the helm to Sheriff Mark Hunter of Columbia County.

Last night, the leadership sword was passed to a new president and the tradition continues.

“Serving in this capacity has been one of the most rewarding experiences of my career,” said Sheriff Adkinson. “We have had a year of tremendous achievement while providing support to those who keep us safe every day – our deputy sheriffs.”

During his tenure as FSA President, Adkinson has guided the association through many large-scale incidents such as the Stoneman Douglas High School shooting and Hurricane Irma, as well as represented FSA when creating groundbreaking school safety legislation that has changed the way our state protects our children. This while providing assistance to agencies that have experienced line of duty deaths, all while dealing with the daily challenges in Walton County.

“The sheriffs in our state were wise when they elected him as their leader and he has served them well—we owe him a debt of gratitude,” said Steve Casey, executive director for the Florida Sheriffs Association. “As the 95th president of the 125-year-old institution, he served admirably as he charted the course for the association and reached new heights both politically and financially.”

Since 1893, the Florida Sheriffs Association has acted as a unified voice of Florida’s sheriffs – 67 in all. The journey to the office of FSA president is long and requires a major commitment of time and effort. Typically, it takes at least 8 years of service in several roles on the board to arrive at the association’s highest office.

“In accordance with our traditions, the president of the Florida Sheriffs Association only serves a one-year term,” said Casey.

As past president, Sheriff Adkinson will officially serve one more year in the line-up as an advisor to the new president. Adkinson will work closely with Hunter during a short transition period and step aside for new leadership.