My hero was the great motorcycle daredevil, Evil Knievel. Even before buying my first motorcycle, I tried to emulate him on a bicycle, as did most kids in my neighborhood. We certainly couldn’t jump cars, buses or the Snake Canyon, but we did jump sidewalk blocks. It may be a bit concerning to have a hero who goes by the name “Evil” but there was something admirable about the courage, bravery and creativity he showed. 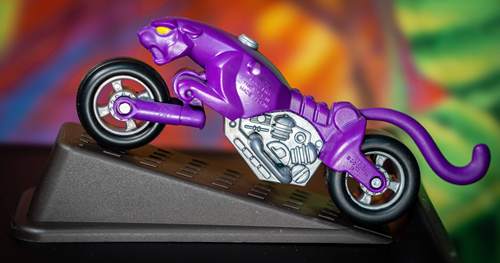 It is no surprise that at the age of five, my son Adam was really into miniature toy motorcycles. When picking him up from kindergarten one day, he became so excited he just had to show me his new toy ramp. It was about 1” tall and 3” long.  I asked him where he got the ramp from, and he said from the Treasure Chest. The Treasure Chest was a small box all the students in his class went to each day to get a trinket from, assuming they had been good and their name was not placed on the chalk board. Adam was such a good student he brought home a prize every day from school, and yet he had never been so excited about any other prize as he was this ramp.

That evening my wife and I went to an Open House at the school at which time we were able to meet Adam’s kindergarten teacher. School had been in session for several weeks and all the parents were given a chance to interact with teachers one on one. Adam’s teacher was very complementary of Adam, but we were a bit taken aback when she asked if Adam told us what had happen in class that day. We could tell by her tone it wasn’t something good. The teacher proceeded to explain Adam had hit another boy in the class and they both had their names placed on the chalkboard. I was flabbergasted. Not that Adam was perfect, but getting into a fight in kindergarten? The teacher went on to say the hardest time for her was seeing how sad Adam was at the end of school when he and the other boy didn’t get to go to the Treasure Chest. She said that broke her heart.

I didn’t doubt the teacher’s recollection of what had happened, but I did ask her if she was sure it happened that very day. She assured me it did happen that day, just hours before we came into the class to meet her. I said that was strange because I saw a toy Adam had with him when I picked him up from school. She doubled down saying that was impossible. She was positive Adam did not go to the Treasure Chest that day. I then explained why I was so emphatic he did come home with something and started describing what the toy was. I told her it was a 1” tall and 3” long ramp. The teacher looked at my wife and I for a few seconds and then began laughing out loud. She was laughing so hard she started snorting and hitting the desk. What could possibly be so funny given the topic at hand was my son being in trouble? She finally gained her composure and explained. The “ramp” Adam took home was actually her doorstop she had been looking for to hold the door open for the Open House. Not only had my son not gone to the Treasure Chest, he had stolen the teacher’s doorstop and called it a ramp!

Though it may be a bit concerning to have a son who was in trouble for fighting, stole something from his teacher, and lied about it, there was still something admirable about the creativity he showed. But how could we get him to focus that creativity in a positive way? Evil Knievel once said after one of his crashes, “you are never a failure until you fail to get up.” As parents, we try to stop our children from crashing. But when they do crash, I’ve learned the most important task is not just to preach at them, but to help them get back up. And yes, he did return the “ramp.”

The post The Ramp appeared first on South Walton Life | 30A News, Events and Community Information.