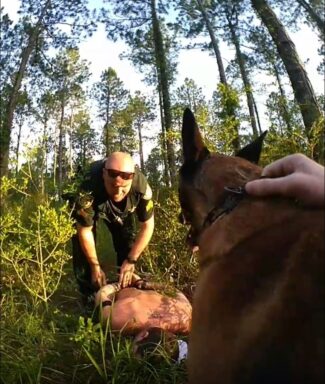 HOLMES COUNTY, Fla— A pursuit across two counties ends in a K-9 apprehension and a suspect in custody Wednesday.

Deputies were patrolling the area of County Road 280 in Ponce De Leon when they noticed a white Chevy Avalanche that was reported stolen out of Georgia.

When they attempted a traffic stop on the vehicle, the driver fled. Deputies pursued the driver, who sometimes exceeded 100 mph to evade capture, into Holmes County.

While heading north on Tramm Road in Westville the suspect ran through a fence and purposely exited the vehicle while it was still in motion.

During the course of taking Prevatt into custody, he was found to be in possession of a smoking pipe that contained a substance that tested positive for methamphetamine, as well as numerous stolen items.

A check with dispatch revealed Prevatt was recently release from the Department of Corrections and did not have a valid driver’s license. He was evaluated by EMS and taken to Bonifay Medical Clinic before being transported to the Holmes County Jail on additional charges of felony criminal mischief.

When extradited Prevatt will also face charges in Walton County, as well as in the state of Georgia.