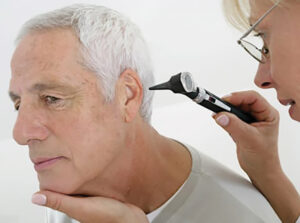 Specifically, the risk of dementia increases among those with a hearing loss greater than 25 decibels. For study participants over the age of 60, 36 percent of the risk for dementia was associated with hearing loss.

How are the conditions connected? Although the reason for the link between hearing loss and dementia is not conclusive, study investigators suggest that a common pathology may underlie both, or that the strain of decoding sounds over time may overwhelm the brains of people with hearing loss, leaving them more vulnerable to dementia. They also speculate that hearing loss could lead to dementia by making individuals more socially isolated—a known risk factor for dementia and other cognitive disorders.

In addition to being an important risk factor for Alzheimer’s and dementia, multiple studies have shown that hearing loss worsens the symptoms of these diseases when they are already present. These symptoms include impaired memory, the inability to learn new tasks, reduced alertness, compromised personal safety, irritability, anger, fatigue, stress, depression, and diminished overall health.

Can hearing aids help? In response to these findings, further studies are underway to determine if hearing aids can delay, or even prevent, dementia and Alzheimer’s by improving patients’ hearing.

The bottom line, generally speaking, hearing loss develops slowly. Our brain’s own ability to compensate and adjust to gradual hearing changes makes hearing loss difficult to recognize. That’s why it’s extremely important to have annual hearing evaluations. Experts encourage people as young as 45 to have a baseline hearing screening. Catching and treating hearing loss early can slow, or stop, its progression.

Taking time to monitor your hearing may save many problems as you get older, you’ll preserve more good hearing for life!