Walton County’s Republican Executive Committee recently elected Bill Fletcher as Chairman and Artie Rodriguez Vice-Chairman. Mr. Fletcher, a long-time activist and community leader, said he considers his election “a great honor to lead the Republican Party and I also can’t think of anyone better to serve as vice-chairman than Artie  Rodriguez. “We’re committed to expanding the conservative voice in Walton County and growing the committee,” he said.

Fletcher is the retired CEO of JTM Industries, a national company dedicated to coal ash  disposal and marketing in coal burning power plants. After working his way up to CEO of JTM Industries, Inc., Bill spent nine years as executive leader growing the company’s annual revenues from $18 million to $62 million, making it one of the largest companies in the U.S. in the industry. “I came up the hard way,” Bill says. I earned every promotion. My experience gave me an appreciation of how difficult it is to run and grow a business. It is my job now to make sure our elected officials understand that and continue to advocate for limited taxes and limited government.” 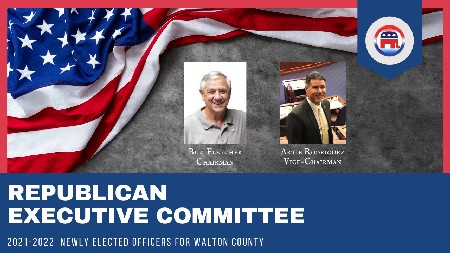 After leaving JTM and making South Walton home, Bill and his wife Mary have been involved with many local community organizations, including the Leukemia and Lymphoma Society, Relay for Life, Emerald Coast Children’s Advocacy Center and the Kiwanis Club of Freeport-South Walton. Bill was also a volunteer with the

Walton County Sheriff’s Office, served on the Boards of Walton County Chamber of Commerce , the ZBA and the Institute for Senior Professionals.

Bill is given a lot of credit for his hard work to defeat a toll bridge being placed on the Hwy. 331 Clyde B. Wells Bridge. “Toll bridge taxes would have put a huge burden on local working people crossing the Bay each day, and today the bridge and highway expansion are complete with no burden on the county or its citizens,” he said.

“Artie and I have set goals for 2021 we hope will be a springboard for the elections in 2022. Our number one goal is to grow the membership in the Republican Party of Walton County and fill all of our offices down to the precinct level. Next, we’ve set a goal to reach out personally to every new resident and encourage them to register to vote. Many people don’t realize you must be registered as either a Republican or Democrat in order to participate in the primary elections. Non Party Affiliate (NPA) voters can not vote in the primaries, so our goal is to educate as many republican leaning voters to officially register.”

In addition, Fletcher and Rodriguez are both committed to greater community engagement, fundraising and an increased social media presence for the Republican Party. Party. For more information on all Walton County Republican clubs, consider attending an upcoming Republican club meeting or email WCREC Chairman Bill Fletcher at fletch7245@aol.com

Hammock Bay clubhouse / theater, 74 Great Hammock Bend, Freeport. The meeting begins at 5:30 pm with registration followed by the 6-7pm meeting with the election of officers and open forum.  Republican and Independent Party members and future Republican members are welcome to attend. For more information please contact  Jacquelyn Dabney at adventureaf@gmail.com.

The May Freeport Republican meeting will be held May 11th at 5:30 pm registration and 6-7 open forum at the Hammock Bay clubhouse- theater.