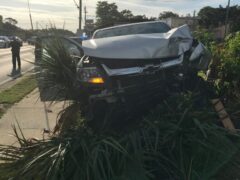 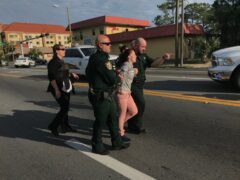 WALTON COUNTY, Fla— Early Wednesday morning a woman was rammed by a vehicle on State Road 285 in Mossy Head. Moments later, she was pulled from her car.

Elijah Jones, 18, and Megan Frazier, 23, have been identified as two carjacking suspects who led Walton County Sheriff’s Office and two other agencies in a pursuit across two counties this morning.

The pair was already driving a stolen gray Kia when they crashed into the victim’s Chevy Cruz at around 6:15 am. After the crash, a passer-by attempted to intervene and Jones brandished a gun, pulled the victim from the vehicle, and left the scene. The pair then drove to the area of Girl Scout Road and abandoned the sedan in a wooded area.

Walton County Sheriff’s Office will be charging Jones and Frazier with the following:

More charges are pending as it pertains to additional crime in our area.

Be the first to comment on "CARJACKING, STOLEN VEHICLE, AND PURSUIT LANDS TWO IN CUSTODY IN FORT WALTON BEACH"