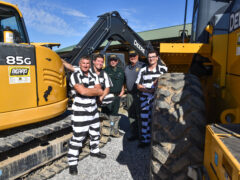 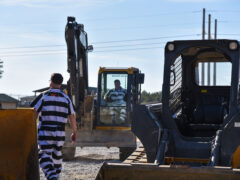 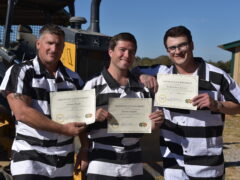 DEFUNIAK SPRINGS, Fla— Four men incarcerated at the Walton County Jail will now have an opportunity for a brighter future once released back into the community.

David Lewis, Jr., Trevor Laughlin, and Johnny Pruett, all received a Certificate of Achievement with the exception of and Clifton Galloway who was released prior to graduation and did not attend.

“These men have made me very proud,” said Walton County Jail Vocational Instructor Mark Simmons. “They’ve worked hard and have earned this recognition.”

While Simmons teaches participants the machinery, Nelson assists with the program by testing inmates. The practical exams and the written exams are then sent to Heavy Equipment Colleges of America for grading.

All four men passed the ADEPT proficiency test and will receive a certificate from Heavy Equipment Colleges of America.

Walton County Sheriff’s Office first offered the Heavy Equipment class in August of 2018 and since then have graduated 23 inmates. COVID temporarily shut down all vocational programs from July 2020 to October 2021.

During the course, participants learn how to operate five pieces of equipment: backhoe, excavator, front-end loader, dozier, and skid steer. In addition, they must learn the extensive safety protocol necessary for operating the equipment.

In order for an inmate to be considered for vocational programs they are thoroughly vetted through the jail’s classification process and must be interested in taking the course.