The couple held their wedding ceremony outside at the Eden Gardens State Park in Santa Rosa Beach, Florida.

Brynley said that when they were dating, the two would take any chance they had to go back to her parents’ house in Destin, Florida, just to be by the water. When they were planning their wedding, they knew that they wanted to jump in the gulf at the end of the night.

Brynley told Insider that the dress she wore for her wedding ceremony was actually the first one she tried on. She said she found it in the basement of the Atlanta, Georgia, store Bridals by Lori, and it was the last one available.

“I cried and so did my mom. I loved it because it felt like it was just made for me,” she said. “It felt rare, beautiful, and just perfect in every way.”

Originally, she didn’t think she was going to be able to afford the dress because it was priced at $7,000. But because it was the last one left in the store and was already discontinued, Brynley said the shop manager added an additional discount because they saw how much she loved it. Brynley ended up paying $2,000 for the dress. Brynley said it rained during her and Lukas’ wedding ceremony, but she still considers it a “perfect” day.

Brynley told Insider that the moment she jumped into the ocean was pure joy.

The couple and 75 of their wedding guests were lined up on the beach for two minutes singing and dancing while they waited for the perfect moment to jump into the sea together. The group was counted down by the wedding photographer, Jayda Iye, and when she got to one, everyone rushed into the water.

“It was actually right after a tropical storm, so the waves were massive,” Brynley said. “It was probably not the safest thing to do, but it was so much fun. After we jumped in, the music kept playing and everybody was just swimming and doing fun stuff in the ocean.”

The whole reception lasted about two hours, Brynley said. Brynley said taking a dip in the ocean was the highlight of her wedding day. 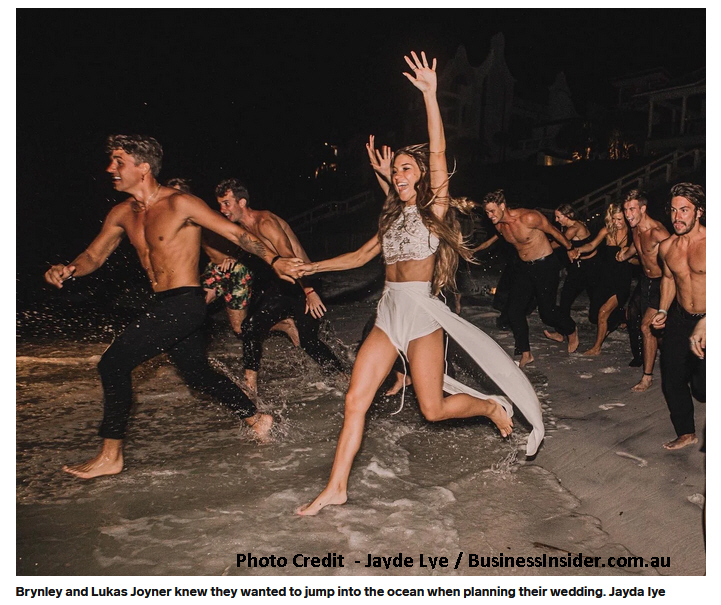