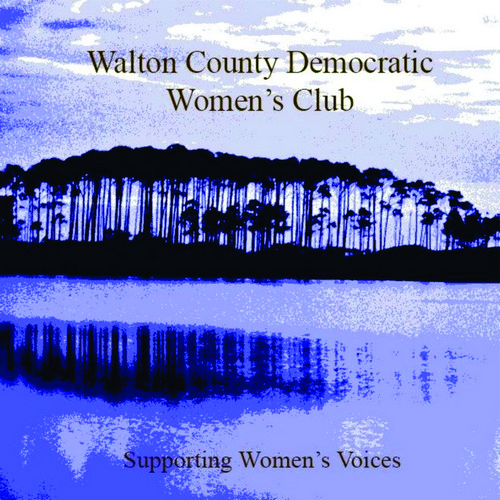 On the cold night in January, 2001, ten Democrats convened in a tiny, unheated office in DeFuniak Springs to determine how they could regroup the local Democratic Party, which was dispirited after the 2000 Florida Election. One loyal Democrat who had read the small ad that was published in a local newspaper asking concerned Democrats to gather that night was Grace Marse. Grace would continue to work with Democrats over the years, helping at fish fries, handing out literature at the Walton County Fair, making phone calls, hosting candidate meet N greets, and even sitting on the side of the Choctawhatchee Bridge outside the Big Blue Bus to register voters in 2008. But what Grace is best known for was organizing the Democratic Women’s Club of Walton County in 2006. Ten seemed to be a magic number for Walton Democrats as there were only ten members who gathered on Grace Marse’s porch that fall afternoon.  They would chart a course for Democratic women in Walton County, guiding the club from a tiny group gathering in a member’s home to one that conducts public forums at the Coastal Branch Library that draw over 100 people to hear discussions on important topics facing Walton County. In recognition of her service to Walton Democrats and the Democratic Women’s Club, the Walton County Democratic Women’s Club will have a special luncheon in Grace’s honor as founder and first president. The event will take place on Tuesday, September 18th at Cantina Laredo Restaurant on Grand Boulevard in Miramar Beach from 11:30 am to 1:30 pm.

The Walton Democratic Women’s Club has organized a series of forums that are open to voters of all persuasions.  In June, the Club hosted a meeting on Customary Use that featured County Administrator Larry Jones and County Attorney Sidney Noyes answering questions about the County’s efforts to install a new Customary Use Ordinance and protect the public’s right to recreational use of South Walton’s beautiful beaches. The forum was standing room only, as 146 people filled the room to ask questions about what FL Statute H.B. 631 would mean for their right to access the county beaches.

July found the Women’s Club again organizing a public forum at the Library, this time about a process of acquiring Quiet Title to property along the beach. Local land use attorney Steven Hall provided an excellent presentation and answered questions from the audience. Again, over 100 people attended this meeting.

Most of us go into the Voting Booth having planned on who to vote for but when confronted with the multitude of constitutional amendments that appear on the ballot, often couched in confusing language, you may be at a loss. On Monday, October 15th from 6-8 pm at the Coastal Library, the Walton County Democratic Women’s Club will host its next citizen’s forum on Constitutional Amendments. The public is invited.

On November 13 from 6:30-8:30 pm at the Coastal Library, we will have another public forum, this time on the Opioid Crisis. Local officials, physicians and treatment personnel will be on a panel to answer questions.

The Democratic Women’s Club believes strongly in providing service to our community. This year we donated landscape plantings to the Muscogee Nation in Bruce and in December we will make Kindness Bags for our local homeless population.