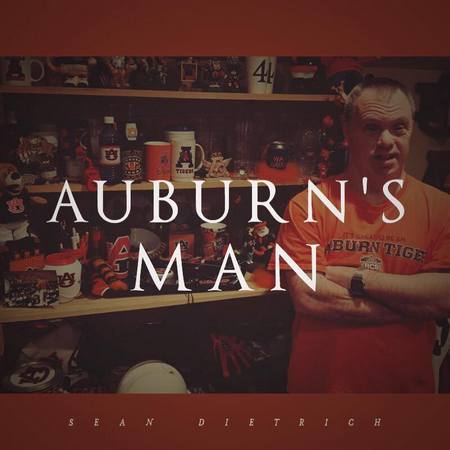 In honor of college football season, I want to tell you about the biggest SEC football fan I know.

He lives in Monroeville, Alabama, which is your quintessential all-American town. Walk the square and take a trip backward on the timeline. Drive around town. You’ll see barbecue joints, a Piggly Wiggly, a Sonic, a world-famous courthouse.

Kenny is late-forties. He lives in the upstairs bedroom of his parents’ house. A little about him: Kenny likes dogs, people, food, singing, sports, and hugging anyone within a six-foot radius.

Kenny has Down syndrome. There is a touch of gray on his temples. His face has smile-lines. And, if Kenny were to ever donate blood, doctors would discover that he bleeds orange and blue.

He is an Auburn University fanatic.

There’s no doubt. He gives me the dime tour of his bedroom—a shrine to the Tigers.

During the tour, Kenny breaks into spontaneous song:

“WAR EAGLE! Fearless and true,
“Fight on, you orange and blue…”

He finishes his performance by hugging me. Kenny gives good hugs.

In the corner is an Auburn Christmas tree, weighted with orange ornaments—he keeps it up year round. Auburn bedspreads, throw rugs, drapes, pillows, light-switch covers.

“When we first had Kenny,” says his father. “Doctors told us our baby had issues. Told us we’d better let him go and institutionalize him.”

Kenny’s father informed the doctor they would do no such thing. Instead, the family built their world around the new baby. They loved him.

“Raising him was the big blessing of our life,” says Kenny’s father. “We were never alone, that’s part of life in a small town. You’re never alone. This community raised Kenny with us.”

Kenny spent twenty years finishing school. His teachers supported him. His peers adored him. Ask around, everybody and their mother’s cousin’s aunt loves Kenny.

After Kenny finished high school, he took a job at McDonald’s. He worked as a custodian and greeter for twenty-three years. This is where he became famous. There aren’t many people in town who don’t know him. That’s twenty-three years of grins, Auburn chants, broom-pushing, laughing, and spontaneous hugs.

He retired a few years ago.

“Yeah, I know Kenny,” says one local man. “Who doesn’t? He’s a fixture in our town. Used’a walk into McDonald’s and he’d greet you and give you a big ‘War eagle!’ Sometimes he’d be the only hug I got all day.”

Before my tour ends, Kenny digs through a shoebox. The box is filled with Auburn pins and buttons. He gives me a parting gift—a tiger-shaped lapel pin.

Then, I remove my hat. I ask if Kenny will sign the bill of my ballcap, which bears the autographs of a few baseball greats, and some others I’ve met.

Kenny’s happy to oblige. He grabs a pen. In over-sized letters he writes: K-E-N-N-Y over the name of a well-known short stop.

“My autograph’s worth a LOT of money than his,” Kenny remarks. “I guarantee you.”

He admires his handiwork and grins. Then, he sings in a quiet voice:

Then, we hug. This time it’s a long hug.

Kenny whispers into my ear. “We’re friends now. You can write about me in your book or whatever.”

We shake on it.