In 1958, Don and Phil Everly lamented the frustrations of many high school young men with a song, “Problems,” which eventually crested at number 2 on the Billboard Top 100 songs. 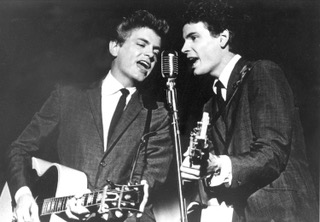 DARN IT!  Racking my brain trying to come up with a piece that’s illuminating, motivating, compelling, thought provoking.  Nothing comes to mind.  The frustration level hearkens back to memories of vain laborious attempts to unscrew the lid from the jar.  Or the car failing to start from a battery dead as a doornail.  Or the long wails of a baby continuing after another futile attempt at comfort.

Anxiety brings chest tightness.  Blood pressure elevates.  So many things to do and the day is wasting.

You ever get that feeling?  Often the stakes are higher.  Hours at work just got reduced and the rent is due in two weeks.  The doctor called to say the test results seem a little bit off; she is going to confer with a specialist and get back to you.  You and your sister had a fight and have not spoken now for six months.

Everybody thinks that his or her problem is big and unique in this world.  Many of us keep on thinking, worrying, and hurting ourselves when some problem arises trying to simply escape away from the pain…

Years ago there was an angel given a project to solve problems—problems of the human kind.  This particular angel was of high intellectual capability and wanted a 100% solution to each of the challenges.  The angel commenced to invite all men, women, and children in his company to write their problems down on a small chit of paper, without revealing names.

Everyone present wrote their problems in detail and folded the paper in half.  They were then told to put their paper in a common box and place them before the angel.

“Now,” the angel said, “Those who want to exchange their problems, please come forward.  Pick a chit and your problems will be exchanged with the one on your newly chosen paper.”

Many kinds of people were gathered:  poor, wealthy, smart, infirm.  They all began to pick and read the other person’s problem.  To the surprise of the angel and all present, everyone’s remarks were the same.

“Let me remain with my existing problem.  I can manage it.  Oh God, I didn’t know this type of problem was also here in the world,” they exclaimed.  They all now knew the extremity of the problems faced by others.

Thanks to Rajesh Rao for not only sharing this story, but freeing my writer’s block.

I knew a woman many years ago who wrestled with cancer, not once, twice, but three separate times.  Further, each instance was a different variety.  There were more than several episodes of surgery, treatment, pain, convalescence, and absence from her regular rhythm of life and work.  In listening to her story and the hardships faced she shared something interesting.  As frustrating and demoralizing as her recovery could be and the helplessness she felt at having to rely on the assistance of others she realized her blessing.  It was that she was providing a ministry opportunity to her family and friends to care, feed, and spend time for and with her, which in turn ministered to them and provided purpose and fulfillment to her many caregivers.

How bad are your problems?  Would you really take a chance to trade with someone else?  Who might be more than willing to help you and by virtue of you allowing them to help provide them with thanksgiving.  Merry Christmas!