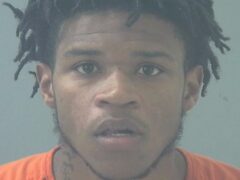 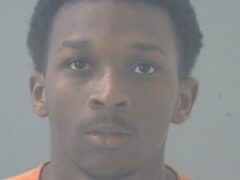 On February 12th a man finished pumping gas in his truck at the Loves Travel Stop in Mossy Head when a suspect put his arm between the doors and shoved a black pistol in his side. His wife, in the passenger seat of the truck, was startled by a second suspect beating on the door and opened it unknowing who it was.

Ladarious Frye, 18, and Quandrareck Jackson, 22, both armed, then threatened to kill the victims if they didn’t get out of the vehicle. Husband and wife then pled for the suspects to let them remove their sleeping 10-year-old daughter from the backseat.

Jackson held a gun to the victim’s head as she removed her daughter from the truck.

The victims were able to thoroughly describe both suspects in great detail and direction of travel.

Later, a Santa Rosa County Sheriff deputy apprehended both suspects after responding to a call for two suspicious people coming out of the wooded area around Kesha Taylor Drive in Milton.

Both men appeared to have been traveling through the woods for some time and had sticks and debris on them. During a search, both Jackson and Frye were found in possession of weapons.

Frye and Jackson are charged with carjacking with a firearm, display a firearm during the commission of a felony, and aggravated assault with a deadly weapon. They are awaiting extradition to Walton County.

Be the first to comment on "VICTIMS PLEA FOR CHILDS LIFE DURING CARJACKING; SUSPECTS ARRESTED FOLLOWING MULTI-AGENCY EFFORT"