(If you don’t like sad stories, you may not want to read this one.) We had traveled in the bus for over a hundred miles to the campsite located in the hills of Tennessee, as had several other Boy Scout troops from the state. Our Scoutmaster was giving his final instructions to the troop before the hike was to begin. Just before we were released to hit the trails, the Camp Commander called up the Scoutmasters from each of the troops with a surprise. He insisted no scout could go hiking with someone from their own troop. They wanted to force us to make new friends. I was teamed up with a boy, Billy, from outside of Memphis who was on his first hike. We were to become hiking buddies for the entire day. 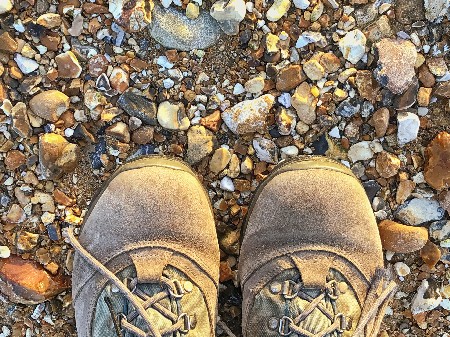 I was a very cautious and compliant scout, but Billy was just the opposite. He was quite the daredevil. He hung over every cliff we came to, each time pretending he was about to fall over. He would take a branch with a few leafs on it, brush it over the face of another scout, and yell, “Poison ivy, poison ivy!” When we stopped to eat lunch, he made sure everyone experienced the fake poisonous snake that would lunge from his lunch box. Billy then started complaining that his foot was hurting. With all of the pranks he had played throughout the morning, everyone was waiting for the next punchline. Billy was serious. One of the Scoutmasters suggested he take his shoes off to make sure there were no pebbles irritating his skin. Billy was way too tough for that. He jumped to his feet and pretended there was no pain.

As was customary on our hikes, everyone was encouraged to gather something from each mile marker we passed. It could be a rock, a leaf, or if we were really lucky, something cool like an arrow-head. Billy found the most interesting artifact of all. It was what appeared to be a small grenade that dated all the way back to the civil war. Billy took the grenade, placed it to his ear and said, “I think I hear it ticking.” He then threw it at the feet of the other scouts who were standing around, and it scared the bejeebers out of everyone. As he was retrieving the grenade, I noticed Billy had started limping even more. Once again, he was encouraged by one of the leaders to take his shoes off and make sure there were no rocks or pebbles to get out. Each time Billy made a joke out of the situation, and he refused to have the sore on his foot looked at, much less put medicine on it.

Billy was one of the most memorable people I’d ever met. I was excited to hear his troop would be joining my troop the next month at the American Legion. Unfortunately, Billy didn’t make it that night. His Scoutmaster asked us all to pray for Billy. It was one of the saddest pieces of news I’ve ever heard. Billy contracted gangrene and had to have part of his foot amputated…all because of a few pebbles. What hurt Billy in the end wasn’t hanging over the cliff, a poisonous snake, or a civil war grenade. It was the pebbles.

Often in life, it is the little things that cause the biggest problems. If we do not take time to deal with problems while they are still manageable, they can fester and grow out of control quickly. Don’t let your molehills turn into mountains. What do you need to take out of your life today?