While visiting the Grand Amphitheater at the Sorbonne in Paris, I took photos of the backdrop from which Theodore Roosevelt gave one of the most famous speeches of all time. His address on April 23, 1910, to the university was originally titled Citizenship in a Republic, but is known today as The Man in the Arena. 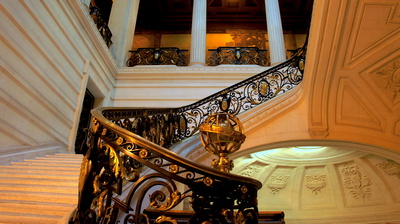 “It is not the critic who counts; not the man who points out how the strong man stumbles, or where the doer of deeds could have done them better. The credit belongs to the man who is actually in the arena, whose face is marred by dust and sweat and blood; who strives valiantly; who errs, and comes short again and again, because there is no effort without error and shortcoming; but who does actually strive to do the deeds; who knows the great enthusiasms, the great devotions; who spends himself in a worthy cause; who at the best knows in the end the triumph of high achievement, and who at the worst, if he fails, at least fails while daring greatly, so that his place shall never be with those cold and timid souls who know neither victory nor defeat.”

At the time of the speech, no one knew the first World War would begin four years later. His words gave hope to the Allied troops during the most dire of situations. Rosevelt was far from home when he prepared his speech. He had just completed a long expedition in Africa prior to arriving in France. Being in foreign lands gave him clarity of thought to articulate why his homeland was so special and worth fighting for. Sometimes one has to get away from the trees to see the forest.

Fifty years ago, astronauts circled the moon with their Hasselblad cameras in hope of acquiring pictures of the lunar surface. Yet, the picture taken during their voyage which received the highest acclaim was an image of a blue planet we call Earth. It is the most influential environmental photograph ever taken. Mankind had to travel hundreds of thousands of miles away just to realize how great we’ve had it all along. As Dorothy said, “there’s no place like home.” The more mankind reaches out to discover new planets, the more we understand just how special our home planet Earth is.

I recently took a trip back to Orlando where I lived for over a decade. After being stuck on I-4 for an hour, I asked for forgiveness and vowed never to complain again about the traffic on Hwy. 98. The Panhandle of Florida does have its challenges. But those of us living on the Emerald Coast can sometimes forget how wonderful our home is, how we fought to make it here, and how views of the Gulf waters and sandy beaches which once took our breath away can seem mundane. The beauty of the tall pines with deer grazing below near one of our beautiful Dune Lakes is something I hope we never become bored of.

The great Coach Vince Lombardi who coined the phrase “winning is the only thing” was very conflicted because he knew the commitment to winning at one thing, such as football, often meant losing in other things, such as family relationships. Later Lombardi would say it this way: “WINNING is not everything–but making the EFFORT to win is.” This seems much closer to the advice of Roosevelt, which was to “spend yourself” for a worthy cause. When Theodore gave his speech, he had already served his country as President and was considered retired. Most thought his best days were behind him. But in his mind he was very much still in the arena, and thus was able to give the most important speech of his life. Stay in the arena. Who knows, maybe your most important accomplishments are still ahead of you.

Be the first to comment on "Chasing The Wind"